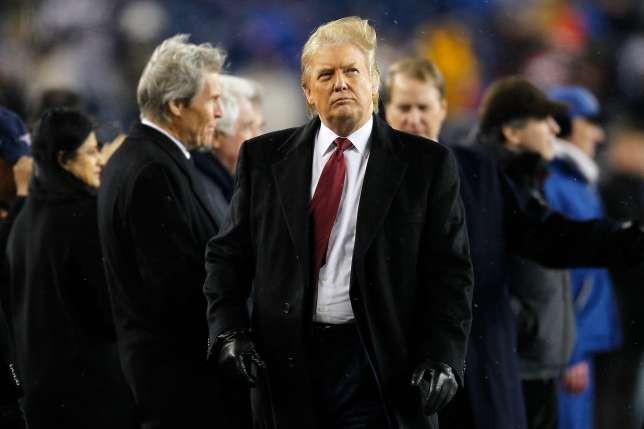 The efforts of the group seemed to work but other factors kept it from helping Trump win the bidding.

In 2014, Terry Pegula, the owner of the Buffalo Sabres, agreed to buy the Buffalo Bills for an NFL-record price, $1.4 billion. But a new report suggests the more interesting — and perplexing — fight was behind the scenes between the other two bidders, Jon Bon Jovi and Donald Trump.

According to a story in GQ by Ben Schreckinger, Trump secretly backed a grassroots campaign to turn the people of Buffalo against Bon Jovi’s group, which included investors from Canada, in an effort to “scare them off.”

The former Trump adviser and Buffalo resident Michael Caputo told GQ that he secretly helped lead the campaign. Since he was a known associate of Trump, Caputo recruited local fans to serve as the faces of the group that called themselves “12th Man Thunder,” including a double-amputee cancer survivor, who served as the leader.

“Trump knew he couldn’t outbid the Canadians,” Caputo told GQ. “I had it all set up with neighborhood guys who lived by the stadium.”

The group rallied against Bon Jovi’s group based on the speculation that they would attempt to move the team to Toronto if they won the bidding. At the time, the Bills were playing one home game each season in Toronto. The group’s antics included “Bon Jovi-Free Zones” in local bars and a “Ban Bon Jovi” movement to rid the area of his group’s music.

While the group did receive widespread attention, including a New York magazine article titled, “Jon Bon Jovi Is the Most Hated Man in Buffalo,” the benefit to Trump’s efforts to buy the team is not clear.

The trust of the late owner Ralph Wilson was expected to accept the highest bid regardless of where the new owner wanted the team to play. Because of that, public sentiment wouldn’t have played a role in deciding who won the bidding. In addition, if Bon Jovi’s ultimate goal was to move the team to Toronto, it is not clear why he would be concerned about people in Buffalo hating him.

Jon Bon Jovi was never considered the favorite to buy the Buffalo Bills because of his financial situation and NFL rules.

But maybe the most perplexing part of all of this is simply that Bon Jovi’s group was never considered the favorite to win the bidding, in large part because NFL rules limited how much his group could offer. In addition, Trump admitted that his bid was not going to compete with Pegula’s bid.

In order for Bon Jovi to have been considered the principal owner, NFL rules stated that he had to contribute at least 30% of the sale price in cash. According to the Toronto Sun, Bon Jovi had an approximate net worth of $500 million at the time. In order for the group to increase their bid to $1.4 billion, Bon Jovi would have needed to contribute $420 million of his own money. It was unlikely that the group would be able to top their bid without pushing Bon Jovi to the background.

As for Trump, he seemed unlikely to up his bid. Trump told Greta VanSusteren on Fox News at the time, “I’ll be bidding. Many other people will be bidding. And I would say the chances are very, very unlikely [that I will win] because I’m not gonna do something totally stupid. Maybe just a little bit stupid, but not totally stupid.”

The fan group also got into a fight with Texas A&M University which threatened a lawsuit over the use of “12th man” which is trademarked by the school. According to Caputo, the embarrassment of threatening a double-amputee cancer survivor with a lawsuit led to a settlement in which the school gave the group $25,000 and they changed their name to “Bills Fan Thunder.”

Once Trump submitted his bid to buy the Bills, he was required to sign a non-disclosure agreement and was “forbidden from participating in public outreach efforts related to the sale,” according to GQ. According to Caputo, at that point, Trump said the group was on its own. From GQ:

Charlie Pellien, a Buffalo local who co-founded the group said that keeping a lid on Trump’s involvement was a challenge. “It was all behind the scenes and we weren’t even allowed to mention his name because of the agreement that he signed,” Pellien told me. “I was bursting at the seams to tell people, ‘Hey, this was Donald Trump’s idea.'”

With Trump having removed himself from the picture, Caputo took the gloves off. “We immediately made it far more aggressive and anti-Toronto than the president ever envisioned, mostly because we didn’t have to worry about getting him crossways with the NFL,” he said.

A member of the “Bills Fan Thunder” group reportedly backed by Trump.

In the end, Bon Jovi was removed from his group in an effort to increase their bid, but they still came up short and Pegula purchased the team. Meanwhile, Trump found a different occupation to fill his time and some in the NFL believed his recent attacks against the league were sparked, at least in part, by his failed bid to buy the Bills.

The White House did not immediately respond to a request for comment from Business Insider.