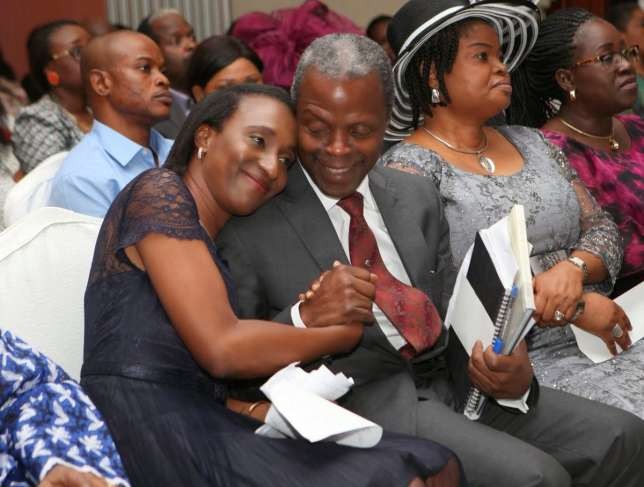 Osinbajo made this known when he showered praises on his wife as they celebrate their marriage anniversary today, November 25, 2017.

Vice-President Yemi Osinbajo has said his home is in the heart of his wife, Oludolapo Osinbajo.

Osinbajo made this known when he showered praises on his wife as they celebrate their 28th wedding anniversary today, November 25, 2017.

Writing via his Twitter handle Osinbajo described his wife as “my treasure”.

He wrote: “When our worlds collided, it was just a matter of time.

“Our story began today, many years ago. The harmony in the symphony. My treasure! Happy Anniversary Oludolapo

“Your heart is my home.”

Osinbajo’s treasure is his wife

In July 2017, when Mrs Dolapo Osinbajo turned 50, the vice-president took to Twitter to shower encomium on his wife.

Mad Love Bayelsa police arrest man for butchering his wife A 24-year-old man has been arrested by the police in Bayelsa State for butchering his wife to death on suspicion of cheating.
Director owed 11 months salaries, commits sucide in Kogi
See how billionaire businessman Tony Elumelu spent his weekend (photos)
Grace Mugabe The lavish former 1st lady of Zimbabwe who built a palace for herself
More photos of Nigeria’s favourite couple, Banky and Adesua at their traditional marriage and details of their upcoming white wedding
Lil Pump -Gucci Gang
Lol…Who did this President Trump?
Photos: Lagos Police Commissioner leads task force to visit Apapa-Kirikiri traffic gridlock
Tizeti partners Facebook to bring Nigerians affordable internet service The Express Wi-fi plans are affordable and range from N50 for 100MB to N2,000 for 10GB.
Oritsefemi Singer announces November wedding date! The official countdown to Mr. Gomina &amp; Nabila’s wedding has begun!
Lifetime African American Movies 2017: New Black Movie – Based On A True Story 2017
Morning Teaser ‘My best friend’s wife is carrying my baby’ Nnamdi is in a very serious dilemma after he got his best friend’s wife pregnant and as the baby is due, he does not know if he should confess what he did.
ROMANTIC HINDI SONGS 2017 – New &amp; Latest Bollywood Songs 2017 – Hindi Heart Touching Songs 2017
‘Words can’t express everything I wish to say’ – 2face Idibia celebrates wife, Annie Macaulay on her birthday today
Amosun, Dalung, Mohammed to cheer Joshua fight
18-year-old pregnant mother-of-one and her husband reveal why they went into robbery
President bans fresh recruitment into MDAs in 2018