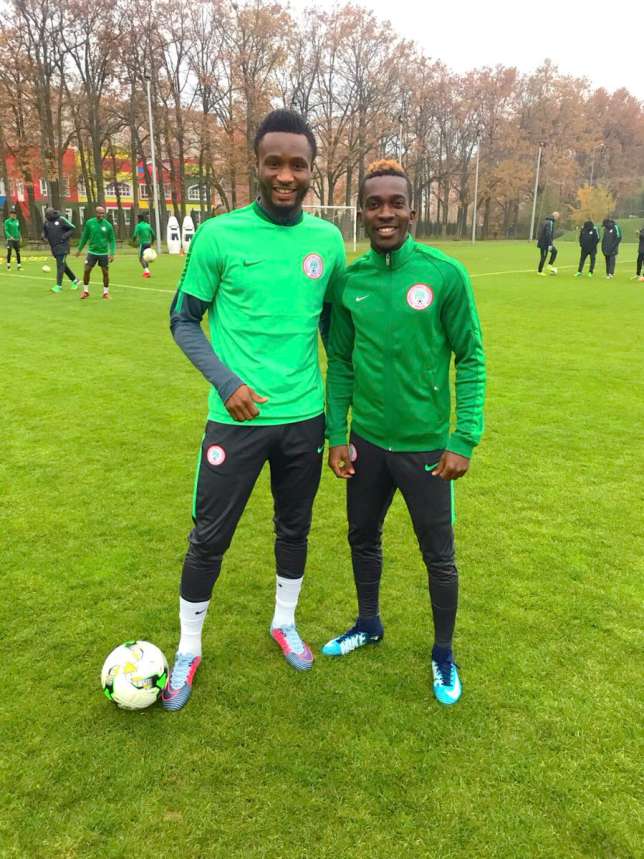 Onyekuru is stoked about being a teammate of his childhood hero, Mikel Obi.

Onyekuru made his competitive debut for the Super Eagles in their Friday, November 10 1-1 draw with Algeria.

The 20-year-old had played for the Super Eagles in two friendly games against Corsica and Togo earlier in the year.

This, however, the first time he is with Mikel Obi in camp as the Super Eagles captain was not available when Onyekuru was first called-up.

“I remember watching this guy play, Winning premier league titles and being a huge inspiration for me and many other kids, Now we are teammates! God is Great,” the Anderlecht forward (on loan from Everton) wrote on Twitter alongside a photo of him and Mikel.

Born in 1997, Onyekuru was just eight when Mikel represented Nigeria at the 2005 FIFA U-20 World Cup in Netherlands.

As a football-loving teenager, Onyekuru idolised Mikel Obi who spent more than 10 years at Chelsea where he won some of the biggest titles in world football.

Onyekuru will be eyeing a start alongside Mikel Obi when the Super Eagles take on Argentina in a friendly game on Tuesday, November 14.

When my father was sick, Bianca chose not to take care of him, rather she pleased herself’ – Ojukwu’s first son, Emeka Jnr speaks