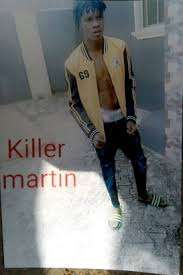 A native doctor reportedly advised the money lovers to murder a person close to them in a bid to get money.

Two out of a group of four Yahoo boys have been apprehended by the police in Edo State while trying to dispose the body of their grandmother Grace Ovbiedo, who was killed for money rituals.

Their arrest was revealed by DSP Chidi Nwanbuzor, the Police Public Relations Officer (PPRO), for Edo State, who mentioned that the force is in pursuit of two other accomplices.

play A collage of family members connected in an incident of mother. This include a grandmother and her grandchildren.

The quartet, Dickson Oluka, Austin Enayi, Salaya Oluka and his brother Martins, who went on the run following the murder that occurred on Friday, December 12, 2017, received the instruction to murder the deceased after consulting a native doctor on how to become rich.

It was alleged that the group of wealth seekers tied a tortoise on their backs and smashed Ovbiedo’s head on the wall. This was based on a message they received from the priest who told them they can acquire their desire when a person close to them is killed.

According to many reports, this was confirmed by a family member who stated that the suspects executed the order as soon as they got home.

People in Nigeria, a nation which believes in fetish traditions have explored the latter in their quest for wealth. These happen on an annual basis and the youths are now becoming lead participants.

This is alarming because those who have opted down this route appear not to see engaging in hard work as an option.

Though the government of the society has not necessarily provided a structure for young people to blossom with ease, but their failure to productively engage themselves in a bid  to overcome this hardship is just sad.

play A youth named Prosper planned to use dresses belonging to his parents for money making rituals.

Meet Prosper, a 24-year-old man has revealed in a viral Facebook video his failed plans to use his parents for money making rituals.

In what will likely shock many, the suspect who believed he had suffered too much in his life mentioned that his action was borne out of the intention to help his folks financially.

He was paraded with dresses belonging to the subjects.

The youth who appeared like one with a shattered hope admitted to the deed in a chat with an interrogator who questioned him about his goals.

What seemed a disturbance to most observers was Prosper’s preference for using his family for money as opposed to getting a job.