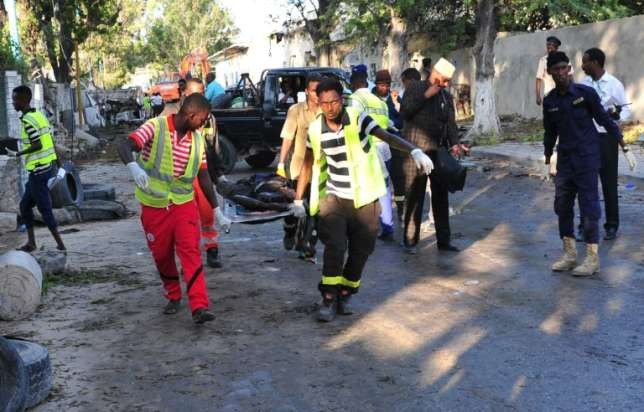 A weekend attack claimed by the Al-Qaeda aligned Shabaab on a hotel in Mogadishu has killed at least 27 people, just two weeks after the deadliest attack in Somalia’s history killed 358 people in the capital.

It is just the latest in a string of attacks in recent years, the worst of which are described below.

October 28: A car bomb explodes outside the entrance of the Nasa Hablod Hotel 2 in the north of the capital, followed by a minibus loaded with explosives going off at a nearby intersection.

Five gunmen then rush into the hotel where security services kill two of the attackers and three others are captured. At least 27 people are killed in the attack, claimed by the Shabaab in a statement on its Andalus radio station, saying it was a hotel where “apostate officials” were staying.

October 14: A truck packed with explosives blows up in Hodan, a bustling commercial district in the city’s northwest, destroying some 20 buildings and killing 358 people and injuring 228. There is no claim of responsibility.

February 19: A car bomb explodes in a busy intersection in the capital Mogadishu, killing 39 people. No one claims responsibility but it takes place as Shabaab fighters threaten a “vicious war” against the new Somali president, Mohamed Abdullahi Mohamed.

January 25: At least 28 people die in a coordinated attack involving two car bombs and an armed assault by Shabaab fighters on the Dayah Hotel near the Somali parliament and state house.

December 11: More than 20 people are killed when a truck loaded with explosives blows up near the capital’s port in an attack claimed by Shabaab.

February 29: At least 30 people are killed and about 60 are wounded in twin bombings in the southwestern city of Baidoa, claimed by the Shabaab.

February 20: A twin suicide attack by Shabaab fighters on the Central Hotel kills at least 25 people, including two MPs.

January 24: The Shabaab takes credit for a suicide attack that kills 33 soldiers at a military base housing Ethiopian peacekeeping troops in central Somalia.

October 4: At least 82 people die and 150 are injured in a truck bombing at the ministerial complex of the transitional government. It is the first attack claimed by the Shabaab since it was pushed out of Mogadishu.

August 24: Thirty-three people including several MPs die after the Shabaab stages a suicide attack at a Mogadishu hotel frequented by lawmakers and top government officials.

May 1: Twin bombings rock Mogadishu’s popular Bakara market and a nearby mosque, an Islamist bastion. At least 32 people are killed, the majority of them Shabaab members.