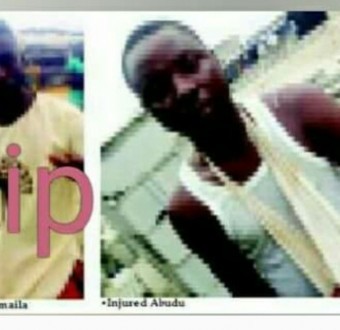 Nigerian Army personnel attached to Exercise Crocodile Smile II allegedly killed one Sadiq Ismaila, 20, and fled with his body to cover up the crime.

Four others including Paul Abudu and Bridget Afolabi were injured in the incident which occurred The incident occurred around 1:30pm, at Oniru Block Village, Lekki on Tuesday.

It was gathered that the soldiers, who came in a convoy comprising three armoured tanks and eight Hilux vans, had on Sunday stormed the neighbourhood and arrested 76 persons.

According to The Nation, the soldiers shot sporadically, sending residents and workers scampering to safety. Ismaila, who was packing blocks in the village, abandoned them on hearing the gunshots. 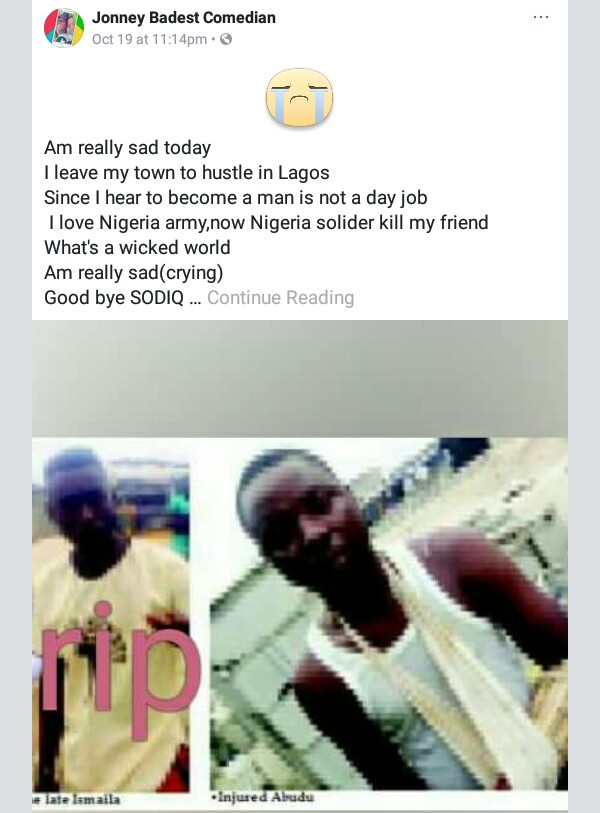 About 65 of those arrested were handed over to the Maroko Police Division, which transferred them to the Lagos State Taskforce on Environment. Others were released at the army barrack where they were allegedly subjected to hard labour and made to sleep in the open field.

According to a food vendor, Rosaline Adedipe, the soldiers shoot Ismaila, because he refused to stop when the soldiers ordered him to do so .

“They shot him on the head. He was packing blocks when the army men started coming to his direction. People were running and Sadiq ran too. They told him to stop but he refused. He ran towards the fence and it was while he was standing by the fence that one of them told the other one: “Wait! I will kill him”.

“Then, that one fired a shot on his head and Sadiq died on the spot. By that time, they had arrested four other persons. They now told the four men to carry his body into their Hilux van and they fled the area. This is the spot where it happened. See his blood still showing on the ground, despite that sand was used to cover it up.

“What the army people did was very wrong. Sadiq neither drank nor smoked. He was just doing his legitimate job and they killed him like that. Those behind it should be arrested. Let justice be done for Sadiq.”

Narrating his ordeal, Abudu told The Nation that he was running like others when they saw the soldiers but suddenly fell.

“One of the army men followed me. When I fell, he jumped on my arm with his boot. I cried and he left me there. That was how I broke my arm. I am not a criminal. I do not smoke marijuana . I ran because they were just arresting people anyhow.”
Afolabi, who sustained leg injury, said she fell while running to avoid being victim of indiscriminate arrest.

He, however admitted that there were some people who indulged in illegal drug abuse.

“I know Sadiq very well. He’s a young man from Oyo State. He just recently finished learning tailoring. He was packing blocks at the village to save money,” he said.

“He neither drank alcohol nor smoked. He was very gentle and respectful. Most of us here are block makers. This place used to be a ghetto where they smoked marijuana but the police have flushed most of them out. So, we renamed it Block Village because we are into block business. Why did they carry his body away after killing him? Is it not because they wanted to cover up their crime? When I heard of the incident, I called the Divisional Police Officer (DCO), Maroko, on phone and told him but he did not come. We are poor people here. Everyone here is afraid because no one knows when the army will come again to cause another trouble.”

Condemning the incident, a lawyer and President, Yoruba Council of Youths, Aremo Hassan vowed to get justice for Ismaila, adding that he was already compiling evidence to formerly report the incident.

“I am at the scene. I have spoken to some of the eyewitnesses and I have also seen the spot where they shot Sadiq. I have seen his blood-stained clothe. This atrocity must not go unpunished.” he had said. In a broadcast message, Hassan wrote:

“Please I just got a distress call that men of the Nigerian Army code named ‘Crocodile Smile 2’ attached to the Epe Army Barracks, without any provocation have killed one innocent man, Mr. Sodiq Ismail, 20, from Ona Ara Local Government Area in Ibadan, Oyo State.

“The soldiers left with the deceased body in their armoured vehicles to cover up their atrocities. The incident occurred during their rampaging show of strength. Kindly alert the whole world of the evil, injustice and killings committed by them.”

Share
Facebook
Twitter
WhatsApp
Pinterest
Linkedin
ReddIt
Email
Print
Tumblr
Telegram
Mix
VK
Digg
LINE
Viber
Naver
Previous articleLove Like A Party 12 years after, prince marries woman he met at a Nightclub …simply because in dreams and in love there are no impossibilities.
Next articleTecno Phone brand storms Dubai again to launch Phantom 8 The launch that was held at the prestigious Armani Hotel, Burj Khalifa Dubai was not only to announce the unveiling of the Phantom 6 and 6 Plus but also to celebrate the brand’s tenth anniversary.