Wowplus
Home World News ‘No matter how grudgingly, Nigerians are accepting that we are doing our... 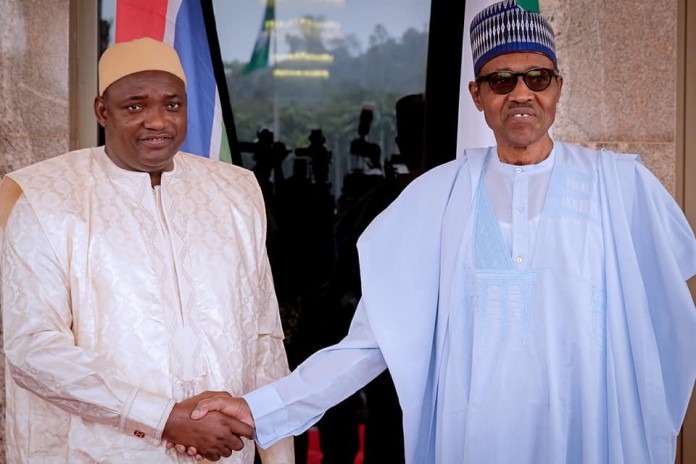 ‘No matter how grudgingly, Nigerians are accepting that we are doing our best” – President Buhari

President Muhammadu Buhari today expressed disappointment that he and other leaders of the Economic Community of West African States (ECOWAS) had to use strong-arm tactics to get Yahya Jammeh, the former Gambian president out of office after failing to win re-election.

“We had to go through those actions because it was the only option for Nigeria and ECOWAS,” President Buhari told Mr. Adama Barrow, the President of the Gambia who succeeded Jammeh.

President Buhari recalled that in spite of all entreaties, the former President refused to accept the outcome of the election he superintended which was widely accepted as credible.

“We thank God for the role He allowed us to play in the Gambia. We believe in multi-party democracy. In Africa, it is absolutely necessary but for the system to work and one to come out of it clean, there is need for patience. Patience on the part of leaders is also necessary in view of ethnic and religious diversities that prevail. Leaders must be patient, hardworking and resourceful,” he said.

President Buhari counselled that if African countries can get the institutional structures of democracy working properly, the continent will emerge from the process of development successfully. He urged the Gambian leader to uphold the legacy of free and fair elections which he described as the biggest guarantee for democracy.

Comparing experiences with the new leader of the Gambia, the Nigerian leader said one of the biggest challenges facing Nigeria is unemployment.

“Sixty percent of the 180 million people are under 25 years. They all wish for a secure future. Those of them who are educated feel they are more qualified for employment. We have studied the problem and are doing our best to stabilize the situation. We took over from a party that had been in power for 16 years. During those years, the country earned an unprecedented amount of money as revenue, never seen at any time before. It is noteworthy that, no matter how grudgingly, the people are accepting that we are doing our best,” he said.

At the end of the meeting, the President announced that representatives of both countries will deliberate and advise the leaders on how best to strengthen the existing level of cooperation between the two states. President Barrow said he came to thank Nigeria and its leader in person for ensuring the completion of the democratic process in his country which had stalled back then following the refusal of Jammeh to accept the election results.

The Gambian leader said his country received the support of Nigeria in many spheres, citing education, administration, justice and security sectors and requested President Buhari to continue to be of assistance. “We will never forget Nigeria for the help it has rendered to us since independence,” the visiting Gambian leader said.

Finally, US agrees to sell fighter planes to Nigeria at $593 Million
Yul Edochie hints at running for presidency come 2019 after failing to clinch Anambra State governorship election
In Edo 3 reverend sisters kidnapped from convent regain freedom
‘We thank you for prayers and goodwill’ – President Buhari and wife thank Nigerians as Yusuf leaves hospital
US stands alone, defiant at UN Security Council over Jerusalem
‘I am appealing to you to try to restrain your people’ – President Buhari tells Governor and elders from Benue state
Donald Trump denies being a racist after ‘shithole’ row
‘The hopes of all Nigerians will become a reality in 2018’ – Atiku
Accept my sympathy’ President Buhari tells APC’s National chairman, John Odigie-Oyegun over Atiku Abubakar’s resignation
The world reacts in anger to Donald Trump’s “sh*thole” comments
Broke ex-Arsenal star Emmanuel Eboue gets coaching job at Galatasaray, after losing all of his assets to estranged wife
Lol..See the frightful statue of former Chelsea star Micheal Essien that was unveiled in Ghana (Photos)
Photos: Pastor Adeboye and wife attend annual Thanksgiving service with Governor Ambode at the state house
President Buhari congratulates Asisat Oshoala on wining the Women’s African Football Player of the Year
‘Catalonia Is Spain!’ Crowd chants at Barcelona rally That was a reference to the decision by Catalonia’s two biggest banks to move their legal headquarters to other parts of Spain in recent weeks due to the political tension.
“We attacked Benue communities because the residents attacked and stole our cows”-Miyetti Allah cattle breeders say
Libya Slave Trade NEMA boss lauds returnees for courage to face fresh start
Trump on Oprah: I’d beat her in 2020
Kalu 10 Million Nigerians will vote for Buhari in 2019, says ex-governor