Joel Embiid is African Player of the Week @therealkaunda @kesesports 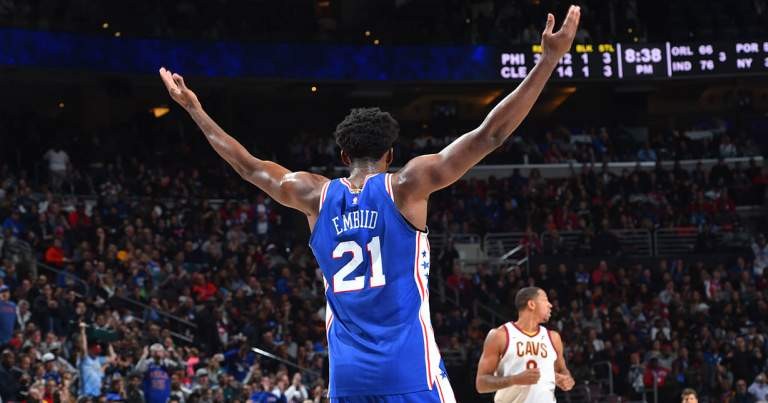 Great excitement has returned to Philadelphia basketball and part of the reason is the performance and personality of the Cameroonian sensation, who also happens to be the team’s starting center, Joel Embiid.

Considering the journey that the 23-year-old big man from Yaoundé took to get to the starting position at the franchise, it is no surprise that he once again gets our nod for the African Player of the Week.

He is averaging a double-double and leading Philly in points per game with 23.1 and rebounds 11.2, and is also dishing out 3.1 assists per game.

Embiid is gaining more acclaim per week for both his on-court and off-court antics, and was recently labelled by sports magazine as the “Rising Star” of sports. This award will be presented to him this week.

The magazine said last Wednesday that it would honour Embiid with the award at its Sportsperson of the Year Awards event in New York this week.

Keeping with his center-size personality, after the Sixers defeated the Detroit Pistons 97-86 on October 24, a game in which he had 30 points and nine rebounds, he commented that he took advantage of Detroit’s Andre Drummond’s defensive prowess or lack thereof.

This led to a social media back and forth between the two, which ended in Drummond taunting Embiid to be ready for their December 4 matchup. Sunday night saw Embiid emerge victorious once again as Philly took the game 108-103. Embiid had a better first half, but Drummond came through down the stretch, helping the Pistons overcome an 18-point deficit in the third quarter.

Our first honourable mention this week goes to Gambian-German forward Dennis Schroder of the Atlanta Hawks, who leads the franchise in points and assists per game.

His most notable performance of the past seven days was in the Hawks’ game against the Cleveland Cavaliers last Friday in which he had 27 points and five assists.

The second mention for this week goes to Nigerian-American guard Victor Oladipo of the Indiana Pacers. Currently the X-Factor at the team, he also leads his squad in points with 23.4 per game and assists with 6.5 per game. He is also grabbing an average of five rebounds per night.

His top performance from the past week was on the Pacers’ matchup against the Toronto Raptors on Saturday in which he had 36 points, seven rebounds and six assists.

If you have any comments and suggestions regarding our selections this week, tweet us on @kesesports with your thoughts.