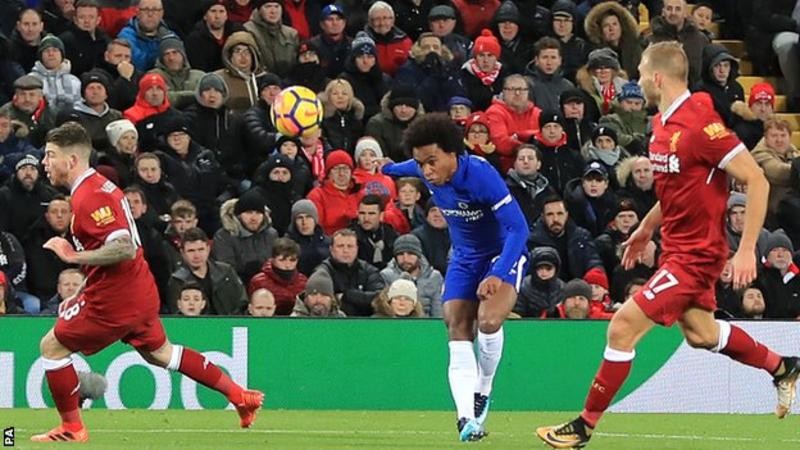 Liverpool boss Jurgen Klopp said he was “angry” that his side were unable to make a substitution before Willian equalised to earn Chelsea a 1-1 draw at Anfield.

Klopp was trying to bring on Adam Lallana when Willian, who scored twice in a 4-0 win at Qarabag in the Champions League on Wednesday, struck in the 85th minute as what appeared to be a cross looped over Simon Mignolet and into the far corner.

“I was angry because we wanted to change the system but the referee didn’t give us the opportunity,” the German told BT Sport.

“I don’t know what he thought in this moment, he told me something about taking too long, I don’t understand it.

“How can we take too long? We didn’t want to time waste, we wanted to change the system and that’s why I was angry.”

The goal denied Mohamed Salah a dream outcome against his former club after the Liverpool winger had opened the scoring just after the hour with a close-range finish.

That was Salah’s 10th goal in just 13 Premier League games this season in what has been a superb start to the Egyptian’s Liverpool career.

Salah could even have won it for Liverpool in the final minute but his powerful drive was saved by Thibaut Courtois.

Chelsea are unbeaten in their past seven visits to Anfield, a run stretching back to 2013.

Sensational Salah unlucky not to have final say

Salah, understandably, was the centre of attention in the build up to the match as he faced his former side for the first time since leaving Chelsea for Roma in the summer of 2016.

The 25-year-old made just 17 appearances and six league starts during his two-year spell at Stamford Bridge but has returned to England a much improved player.

Already the Premier League’s top scorer, Salah has been at his most effective when alongside Sadio Mane and Roberto Firmino in attack but against Chelsea he had Daniel Sturridge and Alex Oxlade-Chamberlain for company in Liverpool’s front three.

The triumvirate may have been different but Salah still showed his class. He was Liverpool’s most dangerous player in a first half light on chances, flashing an effort over the bar early on while a promising run along the edge of the box deserved more but there was no team-mate waiting in the box to meet his cut-back.

It felt, though, that Salah’s name was destined to be written into the story of the game and so it proved. He showed great instinct to anticipate Oxlade-Chamberlain’s poked pass and when presented with a clear sight of goal there was little doubt over the outcome.

Salah did not celebrate the strike, which saw him become Liverpool’s highest scorer in a single season since Luis Suarez hit 31 goals in the 2013-14 campaign.

Chelsea had won two and drawn four in their past six Anfield visits, but despite that record Antonio Conte’s team selection suggested this was a must-not-lose game rather than a must-win.

The Blues lined up with eight defensive-minded players – five defenders along with three holding midfielders as Tiemoue Bakayoko started alongside former Leicester duo Danny Drinkwater and N’Golo Kante in the middle.

That meant Eden Hazard carried all the creative responsibility, a task he grasped fully whenever the visitors had the chance to get forward. His darting runs and sudden changes of direction had the home side’s defence on almost constant edge. It was from his through-ball that Mignolet had to race off his line to deny Drinkwater and it was from his pass that Davide Zappacosta forced the Liverpool keeper to tip over the bar.

However, he visibility tired in the second half, weakening Chelsea’s attack, and when Salah scored it seemed a Liverpool win was inevitable.

Willian was unlucky not to have started after scoring twice and providing two assists in Chelsea’s midweek win in Azerbaijan and it took just 144 seconds for him to make a telling impact in this game.

His three goals in two games is as many as in his previous 25 combined. The Brazilian has been linked with a move away from Stamford Bridge but his impressive recent form suggests he could still play a part for the Blues this season.

Man of the match – Mohamed Salah

What they said – ‘The world is a strange and crazy place’

Liverpool boss Jurgen Klopp: “Everything was good until Willian crossed the ball. Most parts of the game were good but it doesn’t feel it.

“But that is how it is. We will be better. The world is a strange and a crazy place at the moment so I can easily live with a point against Chelsea.

“It was a good game, an intense game and a very difficult game against a strong Chelsea team.”

Chelsea boss Antonio Conte: “I think we must be pleased. Both teams played with a great intensity from the start to the end.

“It was very difficult to play this game after a long travel and no rest for my players, and also because when you play at Anfield it is not simple.

“In our best moment we conceded the goal and were unlucky. But at the same time I was very happy to see a great reaction from my players, with the way they fought and didn’t accept a bad result at Liverpool.”