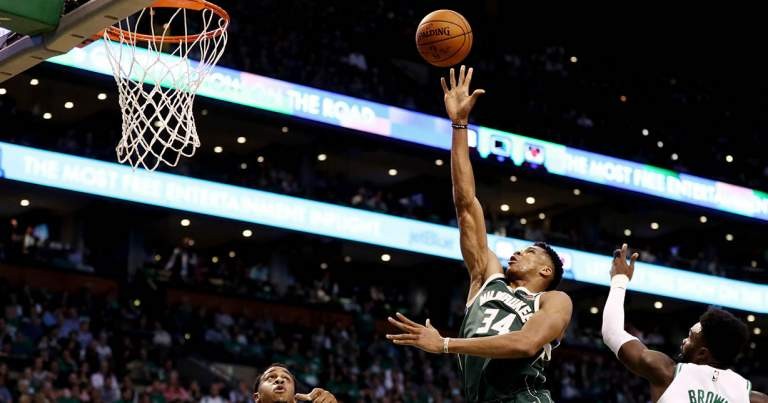 In case you hadn’t heard the news, Giannis Antetokounmpo is pretty good.

So good, in fact, that he beat the Celtics almost single-handedly during the fourth quarter of Wednesday night’s matchup at TD Garden.

The Greek Freak scored 16 points during the fourth quarter alone, thanks to a 5-for-7 shooting performance, to push Milwaukee to a 108-100 win over Boston.

The majority of Antetokounmpo’s work was done at the start of the fourth, as he scored 11 of Milwaukee’s first 13 points of the period. His 11th point of that run came at the 6:27 mark of the quarter and tied things up at 89-89.

The Bucks had trailed by as many as six points early on in the fourth.

Last season’s Rookie of the Year, Malcolm Brogdon, soon got into the mix and combined with Antetokounmpo to push Milwaukee ahead 95-90 with 3:24 left in the contest. Brodgon’s 3-pointer at that moment provided the Bucks with a lead they would never relinquish.

Sometimes you just need to give credit where credit is due. Giannis Antetokounmpo deserves credit tonight.

Antetokounmpo finished Wednesday’s contest as the game’s leading scorer, with 37 points, and rebounder, with 13 rebounds. He was incredibly efficient, having made 13 of his 22 shot attempts and 11 of his 13 free throws. He pitched in three steals as icing on the cake.

As was outlined in our Key Moment section, the Greek Freak also played a major role in shifting the momentum of the contest into Milwaukee’s favor. He scored 11 of his team’s first 13 points to even the score up at 89-89, and his teammates helped to pick him up from there.

This was only Milwaukee’s first game of the season, and only the second day of the NBA’s season as a whole, but the Bucks’ 6-foot-11, matchup nightmare has already drawn a few important letters out of an opposing coach’s mouth.

“That’s an MVP candidate, for sure,” said Brad Stevens.

– Giannis Antetokounmpo led the game in both points (37) and rebounds (13).

– Only two of the 10 Milwaukee players who appeared in the game finished with a negative plus/minus rating.

– Neither team led by more than eight points at any moment of the game.

– Kyrie Irving scored 17 points but struggled with his shot, making only seven of his 25 shot attempts.

– Milwaukee’s 25 made free throws were 14 more than the Celtics connected on.

– Boston shot a woeful 11-for-21 from the charity stripe.

– Rozier and Khris Middleton tied for the game high in assists with six apiece.