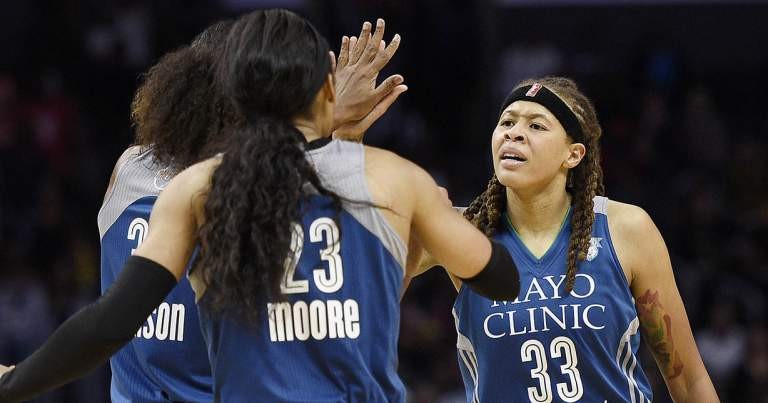 The see-saw that is the 2017 WNBA Finals continued on Sunday, as the Minnesota Lynx stayed alive and forced a deciding Game 5 with an aggressive 80-69 win, to tie the series at 2-2.

The Los Angeles Sparks were the more aggressive team in Game 3, as their game plan of defensive aggression led to better rebounding numbers. It was the turn of Minnesota in Game 4. The Lynx had outrebounded the Sparks in two of the previous three games, but the numbers were only marginal; a total of eight rebounds over two games. The Lynx had total domination of the boards in Game 4, outmuscling the Sparks 48-28. Sixteen of the boards were on the offensive glass.

The ineffectual play of Sparks in the paint also showed in their 3-ball and free-throw numbers. They went to the charity stripe just 16 times, but were 5-of-22 from range. The Lynx on the other hand, drove the lane more: Rebekkah Brunson alone went to the free-throw line 13 times, as the Lynx racked up 30 free-throws, almost double the Sparks’ number. Brunson didn’t go to the free-throw line at all in Game 3. And they were economical in their use of 3-point shots, launching only 12 and connecting on five of them.

Sylvia Fowles, the Lynx MVP center who was limited to just 18 shots in the last two games, after her 10-of-15 field goals of Game 1, was monstrous in Game 4. The 19 field-goal shots she put up were the most by any player in a game in this series. And she made the touches count, as she equaled the 22 points she scored in Game 1, and snagged a series-high 14 rebounds. Lindsay Whalen and Seimone Augustus, who totaled zero points between them in Game 3, contributed 14 points to the win.

For the Sparks’ Candace Parker, the shooting woes resurfaced as she made only 3-of-8 of her field-goal attempts and 0-from-4 3-point shots. Chelsea Gray was also poor on the night with a 27.3 field-goal percentage (3-11, 0-4 treys). As it was in the Game 2 loss, the Sparks’ bench contributed single-digit scoring (seven points). The only time the Sparks won a game with minimal contribution from the bench, was in Game 1 when all Los Angeles starters scored in double figures. On this night, Odyssey Sims, Nneka Ogwumike and Candace Parker were the only ones who managed to score in double figures.