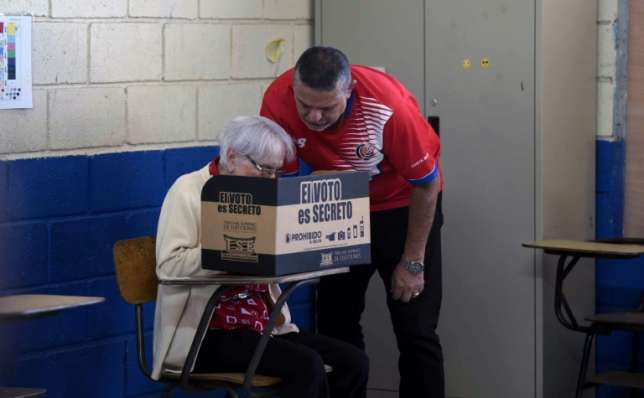 Costa Rica voted Sunday in the first round of the Central American country’s presidential election, which was held under the shadow of a divisive debate on gay marriage.

If no candidate wins 40 percent of the vote, a runoff election will be held on April 1.

Same-sex marriage emerged as a key issue in the socially conservative country, where 3.3 million voters were eligible to cast ballots.

An evangelical politician on the Christian right, Fabricio Alvarado, leapt from obscurity to be the frontrunner with around 17 percent support, according to pre-election surveys, after ferociously opposing gay marriage.

Several countries — Argentina, Brazil, Colombia and Uruguay — already legally recognize such unions and others appear poised to follow. But Costa Rica and others in Central American are resisting the growing trend.

play A supporter of the National Liberation Party (PLN) presidential candidate, one of 13 on the ballot, waves a flag on Costa Rica’s election day

Costa Rica’s outgoing government has indicated its willingness to follow the court’s exhortation, but has butted up against refusal from the notaries’ association that conducts marriages.

“This is the first time I’m voting. I’m a bit nervous,” said Nelia Araya, a 20-year-old student casting her ballot at a school in the capital San Jose.

She said she was worried about one of the candidates’ “homophobic discourse” and had urged her family to vote “so that someone who wants to take rights away from people doesn’t win.”

In a related gesture, eight women went to vote in different polling stations dressed in costumes modeled on “The Handmaid’s Tale,” a US TV series about a dystopian future in which women are subjugated, to protest what they termed a “fundamentalist threat.”

Polling in the country took place under a bright blue sky and tropical sunshine. After a slow start, lines appear later in the latter part of the day.

Solis said as he voted in San Jose to choose his successor that he saw the biggest problem facing Costa Rica to be “the fiscal deficit and its combination with the debt.”

Accompanied by relatives and advisors, the outgoing leader called on voters, who were also choosing a new legislative assembly, to “elect a government better than mine, a president better than me.”

A country with a costly health and pension system, Costa Rica has seen its deficit inch up to stand at 6.2 percent of gross domestic product.

Public debt is 65 percent of GDP, creating concerns among officials that much-vaunted economic stability could be threatened.

The outgoing government — like the three before it — was unable to push through tax reforms to counter the growing deficit.

play Outgoing Costa Rican President Luis Guillermo Solis called on voters, who were also choosing a new legislative assembly, to “elect a government better than mine, a president better than me”

The outcome of Sunday’s election was difficult for surveys to predict. According to the most recent poll, published Wednesday, 36 percent of voters were undecided which presidential candidate to back.

Four of the candidates, including ostensible frontrunner Alvarado, were seen leading the pack, but with little between them.

Analysts said a factor in the electoral disenchantment with the candidates was a perception of political corruption, reinforced by a recent scandal over influence peddling related to a state bank loan to import Chinese concrete.

Insecurity is also a concern for voters. Though Costa Rica is far safer than the so-called Northern Triangle of Central America — Guatemala, El Salvador and Honduras — its murder rate has hit a record high, and the police say gang activity is on the rise.