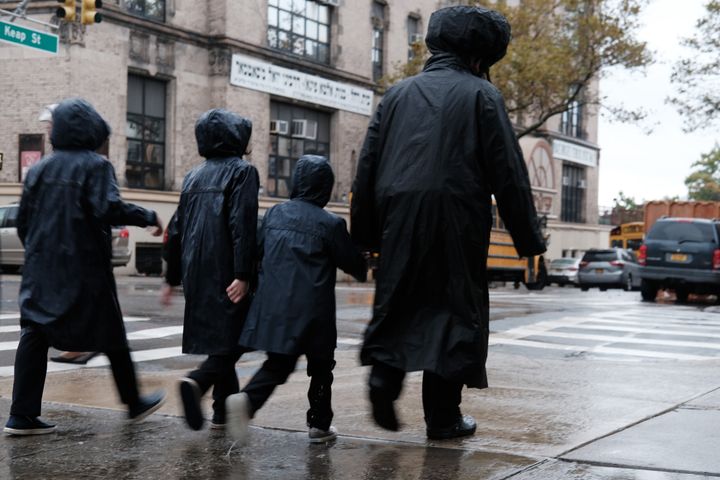 Flurry Of Anti-Semitic Attacks Emerge In New York City During Hanukkah, New York City police are investigating at least six possible anti-Semitic hate crimes that occurred over the past week and coincide with Hanukkah.

The attacks occurred primarily in the borough of Brooklyn, with multiple victims between the ages of 6 and 65 years old claiming they were physically assaulted and, in some cases, subjected to anti-Semitic slurs.

Mayor Bill de Blasio pledged to increase police presence in the Brooklyn neighborhoods of Crown Heights, Williamsburg and Borough Park in response to the assaults. He also said police will increase visits to houses of worship and “other critical areas” in the community.

Hate doesn’t have a home in our city.

In light of recent anti-Semitic attacks, the NYPD will increase their presence in Boro Park, Crown Heights and Williamsburg.

Anyone who terrorizes our Jewish community WILL face justice.

During a news conference Friday afternoon, the New York Police Department’s chief of detectives Rodney Harrison said that since Dec. 13, police have been investigating eight “alarming” hate crimes. (A motive hasn’t yet been established for all of these instances.)

“We treat them very seriously and we make sure that our investigators do their best to do what we can to bring these individuals to justice that commit these crimes,” Harrison said.

On Monday morning, a 65-year-old man wearing a yarmulke was reportedly punched and kicked in broad daylight near Manhattan’s Grand Central Terminal by an attacker who yelled an expletive and referred to the victim’s Jewish identity, according to CBS New York. A suspect was charged with assault as a hate crime for the attack.

Later on Monday, police received a report that two boys, ages 6 and 7, were attacked by a group of teenagers inside a residential building in Williamsburg, CNN reported. Harrison said Friday that one of the boys was punched in the stomach. The case is still being investigated.

Stephen Levin, a New York City council member, said on Twitter that the children were residents of that apartment building. He said the building is a New York City Housing Authority development where the “Hasidic community has lives [sic] side by side in harmony with the broader community for decades.”

It pains me to hear that the anti-semitism that we are seeing-which is often directed at those Jews who are ID’ed by their clothing-is being directed at children in their own building. Every person of good faith has to call this out & ensure hate has no place among our children.

Then, early Tuesday morning, a group of over 10 people cursed and yelled anti-Semitic slurs at a 25-year-old man walking down a street in Crown Heights, CBS New York reported. When the victim took out his cellphone to record what was happening, one member of the group allegedly threw a drink at him, and the group scattered, CBS reported.

Harrison said Friday that the individual who threw the drink has not yet been identified.

Later that day, a 56-year-old man walking in the same neighborhood was also attacked. Surveillance footage obtained by CBS shows the man being punched in the head and falling to the ground. The suspects in this case have not yet been identified, Harrison said.

The fifth incident took place on Thursday afternoon in south Brooklyn, NBC New York reported. Police said a 34-year-old Jewish mother was walking in the neighborhood with her 3-year-old child when an attacker yelled anti-Semitic slurs at her and hit her in the face with a shopping bag. The suspect, identified as 42-year-old Ayana Logan, was charged with assault as a hate crime.

On Friday morning in Crown Heights, police said three women between the ages of 22 and 31 were slapped in the face by a 30-year-old female suspect, who was later arrested and charged with harassment in the first degree, a hate crime. Harrison said that during an interrogation, the suspect said that she committed the crime because she thought the women were Jewish.

There was at least one other incident Friday morning with a possible anti-Jewish bias. According to ABC New York, a man walked into the world headquarters of the Chabad-Lubavitch Hasidic movement and threatened to shoot up the place. The man reportedly walked away after issuing this threat, ABC reported.

.@NYCMayor meets with the community at the Chabad Lubavitch Headquarters in Brooklyn. pic.twitter.com/k84Q6Sujyb

The Hanukkah attacks occurred just about two weeks after a targeted anti-Semitic shooting at a kosher market in nearby Jersey City left three victims dead, including two Hasidic Jews.

But long before the Jersey City shooting made national headlines, Hasidic Jewish communities in the New York-New Jersey region had been raising alarms about a spike in attacks. Last month, several Jewish men and boys in the Borough Park community were chased and punched. In Crown Heights, two Hasidic Jewish teens were assaulted by five men in November in what’s being investigated as a hate crime.

The NYPD documented 311 total hate crimes from January to September of this year, over half of which targeted Jews, the Times of Israel reported.

Evan Bernstein, the Anti-Defamation League regional director, said the organization is appalled by the “sheer frequency and aggressive nature” of the incidents, especially during the holidays. Hanukkah, the Jewish festival of lights, began on Sunday.

“Enough is enough; now is the time for society to come together in rejection of this hate and for public officials and community leaders to speak up, lead by example, and demand meaningful change to protect the Jewish community,” Bernstein said in a statement.