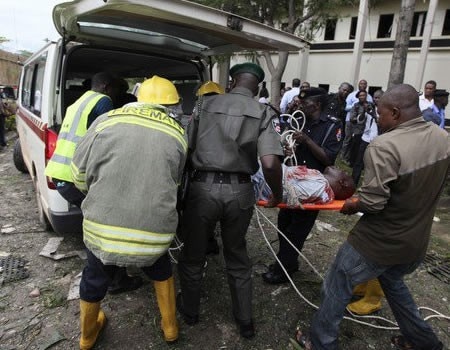 The police have said at least 13 people died while 53 others were injured in the two terror attacks which occurred in Biu, Borno State on Saturday, December 2, 2017.

Borno police spokesman told The Cable that the suicide bomb attacks occurred at the town’s market around 9am.

A Biu resident who earlier spoke to Pulse had said the death toll would run into dozens.

A trader, Shaibu Biu, said that “uncountable” number of people have were injured in the attacks.

“My friend Ibrahima was among those that were killed. First, we had a very loud explosion then we had another one in the middle of the markets”,  Biu told The Cable.

“Countless of people have died while unaccountable were injured.”

The police spokesman said, “One of the bombers detonated IED strapped on her body within Biu Main market, while d other one detonated outside d market square.

“The Corpses & the injured persons have been evacuated to General Hospital Biu. Meanwhile, normalcy has been restored and the area rendered safe.”

Biu is one of the few towns where terror group, Boko Haram has never captured and controlled.

But the terrorists attempted to capture the Biu Cantonment in 2015 but failed.

In Bayelsa Police draft 16 gunboats, 6, 000 policemen to creeks
At least 20 people shot as gunman opens fires during church service n Texas
13-years old girl narrates how uncles took turns to rape her
Toke Makinwa’s birthday outfit is a Balmain camouflage sequin dress that costs N1.2million
Punk group attack ‘police state’ on Trump anniversary
Nine dead, many injured in accidents
India rounds up beggars ahead of Ivanka Trump’s visit
NSCDC arrests 5 persons with 2 truckloads of suspected stolen diesel In Delta State
Teen made 911 report that preceded policeman killing him, investigators say
‘My talent is as big as my ass’ – Ghanaian curvaceous actress, Moesha Buduong brags (Photos)
Stray cat a suspect in attempted murder In Japan
Union urges IGP to probe shooting of students in Ibadan
16yr old girl remanded in prison for stabbing 20yr old lover to death
‘It’s better to be single than being in a relationship where you still feel very much alone’ – Omowunmi Akinnifesi advices Ladies
18-year-old pregnant mother-of-one and her husband reveal why they went into robbery
Why I withdrew Governor Obiano’s security personnel – Police IG Speaks.
Snapchat Social app’s Spectacles device not looking so spectacular now The sales of the camera-recording device has not been very encouraging for the millennial-friendly app.
Police nab suspect operating with master key