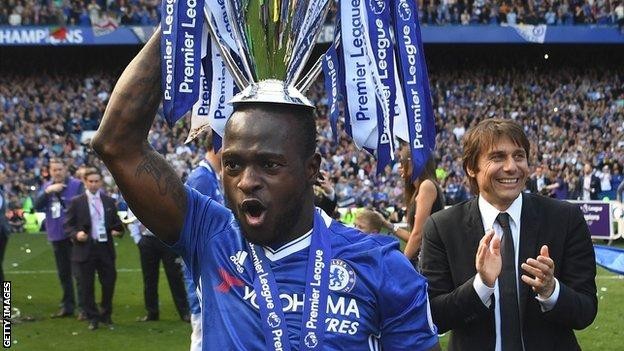 That Victor Moses had the perseverance to make a success of his Chelsea career despite being continually sent out on loan says a great deal about his character.

Yet this determination pales into insignificance when compared to the biggest mountain he has had to climb.

Moses was just 11 when he arrived in England as an asylum seeker after both his mother and father were killed during religious clashes in Nigeria in 2002.

The 26-year-old was playing football in the streets when his parents lost their lives. Just a week later, his remaining family had cobbled together enough money to send him away from his homeland.

That is how a quiet, unassuming and non-English speaking African orphan found himself in south London and at the start of a dramatic change in his fortunes.

“It was tough in the beginning – being suddenly thrown into a different culture and stuff like that,” Moses told BBC Sport.

“As a young boy in a new country, you had to make new friends and that was really difficult. When I first came, I couldn’t even speak the language.”

Having been placed with foster parents, Moses was sent to school in South Norwood, which was close to an asylum support and immigration centre in Croydon.

“It was really difficult to start with but I survived.”

More than just surviving, the player has thrived in his second home.

Today Moses boasts Premier League, Europa League and Africa Cup of Nations winners’ medals, and has also played in both the Champions League and World Cup.

The first tentative steps on the road of this blossoming career were taken shortly after arriving in London. As is common in young Nigerians, Moses played football for fun and his enthusiasm and prowess on the pitch soon led to him catching the attentions of Cosmos 90 FC, a team which played in a nearby youth league.

“At 13 it was my first contact with organised football and when they saw the way I was playing with the other kids and around the park, they knew I had talent,” said Moses.

The Sunday League side had been struggling at the time but Moses’ arrival soon turned the club’s fortunes around and word rapidly spread about the dazzling African talent playing on the pitches of south London. Hundreds started watching Cosmos’ games.

“It was Cosmos who actually told Crystal Palace about me,” added Moses. “Palace came to have a look, liked what they saw and they took it from there.”

Impressing on trial, Moses signed a schoolboy contract with the south London club.

Palace then placed the teenager in one of Croydon’s best private schools, Whitgift, giving him access to superb tuition, facilities and an environment in which he could move on from his past at his own pace.

“Coming from where I was coming from, it was a different ball game,” he recalled.

“Obviously the accent was a bit different from the way we spoke in Croydon but it was good to experience what private school was about.

“The treatment there was good, the education amazing. I was very happy that Palace gave me the opportunity to go to a school like that. I really enjoyed my time there.”

Alistair Osborne, Whitgift’s head of sport, told BBC Sport: “We are hugely proud of Victor’s achievements. He had a constant smile on his face, and his story is inspirational.”

On the football pitch his extraordinary goalscoring exploits for the school led them to the English Schools Under-14 Cup final where Moses scored all five goals in the final.

In what now seems like fateful coincidence, Whitgift’s football coach was a Chelsea legend, the former defender Colin Pates.

“He was a good man, and I always like being around him,” said Moses. “He always encourages me every time he sees me and he always believed in me when we used to play school games.”

“He encouraged me to do the best I can to become a professional footballer. At that time I was very young but when older people like that are giving advice, you have to take it.

“The most important thing that he always said to me is: ‘You’ve got to work hard as a footballer. Talent alone won’t take you there, hard work is what is going to help you’.”

The Nigerian is grateful for the advice from such an experienced individual so early on in his career. Now the demands of notorious taskmaster Antonio Conte will shape the next phase of Moses’ long and winding road to the top.

Prior to Conte’s arrival at Chelsea in July 2016, only Rafa Benitez had given Moses anything like a chance at the Blues following his signing from Wigan Athletic in 2012.

After Benitez’s exit, Jose Mourinho, who took charge in 2013, didn’t have a place for Moses in his team and sent him away on consecutive season-long loans to Liverpool,Stoke and West Ham.

Yet Conte saw something in the Nigerian that no one else had spotted, not even Moses himself.

“I’ve never played that (wing-back) position before,” says Moses. “When the manager came in, he talked me through it and then put me there.

“It was good to have the manager’s support, and he backed me and gave me the confidence to go out there and express myself. So I just wanted to go out there to play for him, the fans and the football club. I didn’t let him down.”

Moses was thrust into Chelsea’s starting line-up for the first time in three years, at Hull in the league in October 2016. He adapted to the unfamiliar role so well that not only was he named man-of-the-match, but his performance kick-started a run of 22 Premier League appearances in a row (halted only briefly when injury struck in April).

Rory Jennings, of CFC Fan TV, is under no illusions about the significance of Moses’ development at wing-back.

“Moses played a huge role in Chelsea’s success last season,” he told BBC Sport. “His brilliance allowed us to amend our formation and play a system that nobody else in the Premier League could cope with.”

Moses calls winning the title one of the happiest days in his life. He has also celebrated World Cup qualification this year with Nigeria, the country he opted to represent despite having played extensively for England at youth level.

With a growing trophy haul, regular football and ever-increasing respect, Moses has overcome both personal heartbreak and repeated professional setbacks to finally reach the top.

Surely few would begrudge him such success.