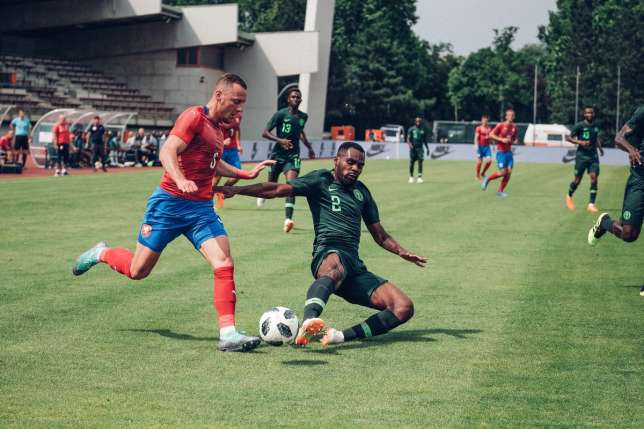 The game between the Super Eagles and Czech Republic was abandoned due to rain.

The Super Eagles of Nigeria had to abandon their friendly against Czech Republic on Wednesday, June 6 due to rain.

The game between the Super Eagles and Czech Repbublic had to be called off due to persistent rain fall.

Before the game was called off, the pitch was due and playable as both sides tried to find the opener in the early stages o the encounter.

The Czech Republic however took the lead in the 24th minute when defender Tomas Kalas put the ball in the net.

The Super Eagles tried to find an equaliser before the close of the first half as Victor Moses and Alex Iwobi came close.

The Czech Republic went to half time one goal ahead, with the Super Eagles unable to break down a solid defence.

At the start of the second half the Super Eagles tried to be more proactive with Brian Idowu going close.

The game however had to be temporarily called off in the 59th minute, as the persistent rainfall rendered the game unplayable.

The game was supposed to go on break for 10 minutes, but the rain calmed and play resumed accordingly.

The Super Eagles could not get back into the game with about 30 minutes left as they wasted chances to equalise in the encounter.

After a 1-2  loss to England the Super Eagles aimed to get back to winning ways before the 2018 FIFA World Cup.

The result means that Nigeria failed to win any of their home matches before the 2018 FIFA World Cup after a draw against DR Congo and consecutive defeats to England and Czech Republic.