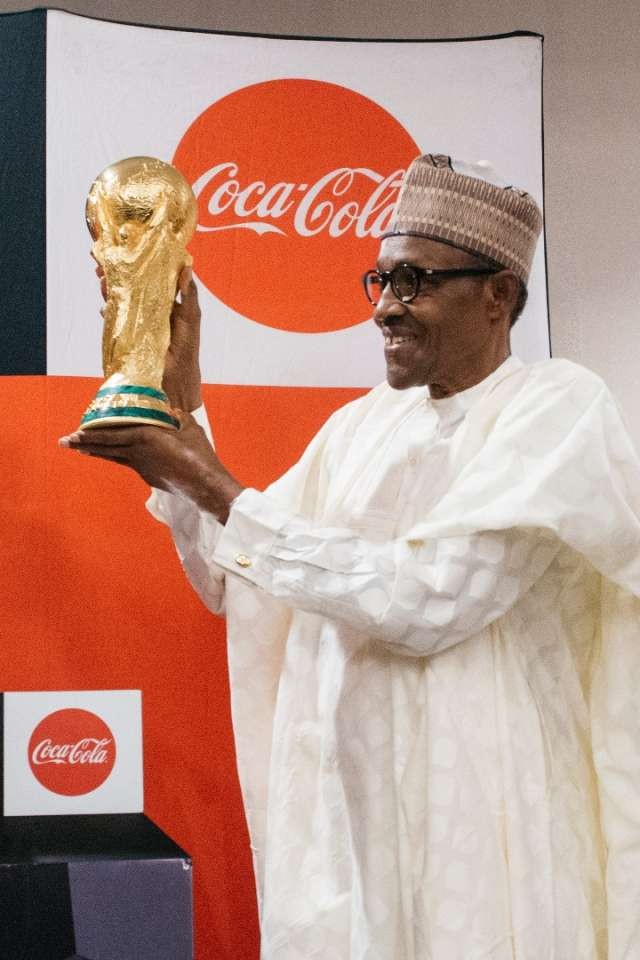 President Buhari is the only Nigerian allowed to touch the World Cup trophy.

So the official 2018 FIFA World Cup trophy is in town after its arrival in Abuja on Wednesday, March 7 and President Muhammadu Buhari touched it.

Ahead of the 2018 FIFA World Cup in Russia, FIFA and long-time sponsors Coca-Cola are touring with the trophy.

The tour kicked off in Russia, host of the 2018 FIFA World Cup and will touch down in a total of 91 cities in 51 countries across six continents before the final.

The trophy arrived in the capital city of Nigeria, Abuja at the Nnamdi Azikiwe International Airport aboard a chartered flight at 11 am on Wednesday.

A series of events of the tour followed as the trophy visited the State House in Abuja before football fans had the opportunity to see and take photos with it.

play Simi here poses with the trophy which was in a glass thick glass case. No one is allowd to touch it (Coca-Cola)

No one can touch the World Cup trophy

The trophy was heavily guarded throughout these events and no one, absolutely no one was allowed to touch it.

From players to the president of the Nigeria Football Federation (NFF) Amaju Pinnick to sports Minister Solomon Dalung to the regular football fan.

The is is because of FIFA guideline which says that only winners of the tournament.

The only Nigerian that has touched the trophy since it landed in Abuja is President Buhari.

Buhari touched and carried the trophy at the event at the State House on Wednesday. He is however allowed to do that as another FIFA guideline allows heads of state to handle the official World Cup Trophy.

He will be the only Nigerian to ever touch the World Cup except the Super Eagles win it come July in Russia.