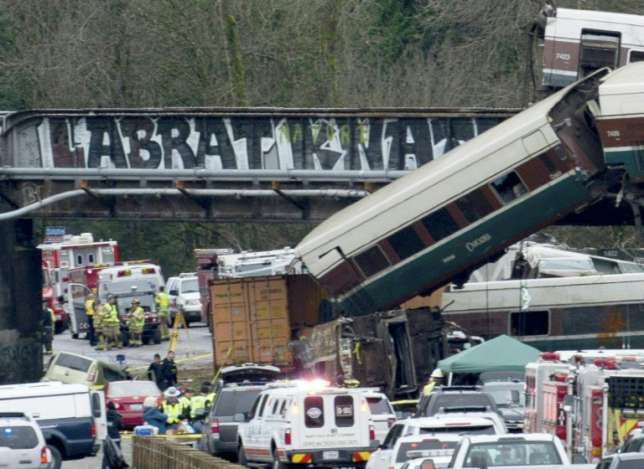 At least 3 dead as train derails over state highway

An Amtrak passenger train traveling on a new route for the first time derailed Monday in Washington state, killing at least three people as cars plunged off a bridge onto a busy highway at the height of morning rush hour, officials said.

An Amtrak passenger train traveling on a new route for the first time derailed Monday in Washington state, killing at least three people as cars plunged off a bridge onto a busy highway at the height of morning rush hour, officials said.

The train, which was carrying 77 passengers and seven crew, derailed in DuPont about halfway between Tacoma and the state capital Olympia on a curve that passes over busy Interstate 5 at about 7:40 am (1540 GMT).

Pictures from the scene showed one Amtrak train car overturned and crushed on the interstate highway and others dangling from the overpass.

Several other carriages of the 14-car train also ended up on the highway, shutting down a key section of the busy artery that connects the greater Seattle metropolitan area to Olympia. All but one car jumped the tracks.

A spokeswoman for Washington State police, Brooke Bova, confirmed the death toll, adding that all train cars had been searched by emergency personnel.

But she cautioned that several of the roughly 100 people taken to area hospitals were in critical condition.

“We don’t know if that number will change,” Bova said of the death toll.

Officials gave no reason for the derailment of southbound Amtrak train 501, the inaugural run of a new service that promised faster connections between Seattle and Portland, Oregon.

Local officials had warned only weeks ago that the track still might not be safe enough to handle trains at higher speeds.

None of the people in vehicles traveling on the highway below the train were killed, according to Ed Troyer, a spokesman for the Pierce County Sheriff’s Department.

Police said five vehicles and two trucks were hit on the highway.

The National Transportation Safety Board has sent a team of experts to investigate the incident.

Chris Karnes, a local transit official who was aboard the train, told local CBS News affiliate KIRO-TV that the accident took place while it was going around a curve.

“All of a sudden, we felt this rocking and creaking noise, and it felt like we were heading down a hill,” he said.

play Map of the US state of Washington locating the site of a passenger train derailment that has killed several people, according to local officials

“The next thing we know, we’re being slammed into the front of our seats, windows are breaking, we stop, and there’s water gushing out of the train. People were screaming.”

A conductor in one of the two engines on the train placed the emergency call.

“We were coming around the corner to take the bridge over I-5 there right north of Nisqually and we went on the ground.

“We got cars everywhere and down onto the highway,” he said.

Amtrak president and co-chief executive Richard Anderson said he was “deeply saddened” by the crash.

“We will do everything in our power to support our passengers and crew and their families,” Anderson said.

The accident marred the launch of faster services on the route after a $181 million upgrade project that included improving the rails, the signaling technology and the locomotives.

play A wider view of the accident scene

Local officials had worried about trains going at higher speeds through the curves in the area. The trains were expected to reach speeds of 79 miles (127 kilometers) per hour through the densely populated area with the improved systems and track.

In early December, Don Anderson — the mayor of Lakewood, Washington, a Tacoma suburb just a few miles from the accident site — had warned that more needed to be done to ensure safety on the route.

“Come back when there is that accident, and try to justify not putting in those safety enhancements,” he said, according to KOMO News.

Karnes said the tracks were supposed to have been upgraded to accommodate higher speeds.

“I’m not sure what happened,” he said.

US President Donald Trump said the accident underscored the need to invest in infrastructure.

“Seven trillion dollars spent in the Middle East while our roads, bridges, tunnels, railways (and more) crumble! Not for long!” he tweeted.

The new Siemens Charger locomotives were equipped with “positive train control” safety systems, designed to automatically stop the train in dangerous situations and mandated for trains around the country.

But the technology was only expected to be used next year when it is activated on the entire rail corridor, according to the Washington State Department of Transportation.

In 2015, an Amtrak train going far over the designated speed for a stretch of curves in the track in Philadelphia derailed, killing eight.

At the time, analysts said positive train control technology could have prevented the accident.