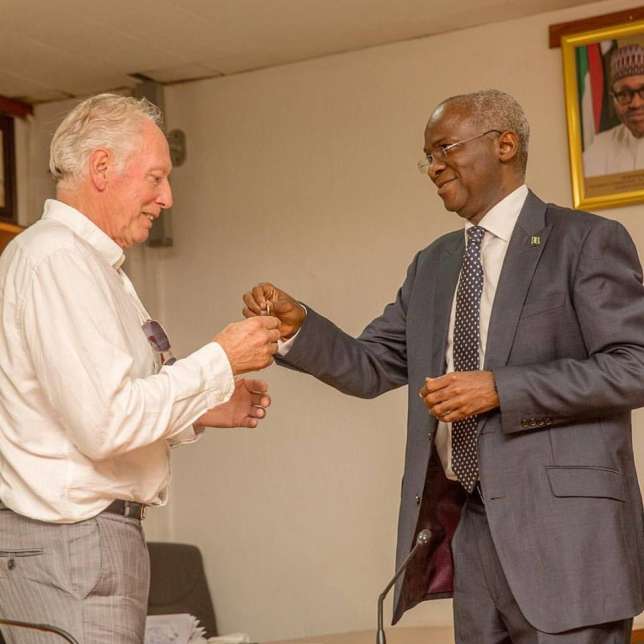 The promise was made during the late Gen. Sani Abacha administration after Nigeria won the AFCON title in 1994.

The Federal Government on Tuesday in Abuja handed over the apartment promised a former Super Eagles coach, Dutchman Johannes Bonfrere in 1994.

The promise was made during the late Gen. Sani Abacha administration following Super Eagles’ victory in the African Cup of Nations in Tunisia.

The Minister of Power, Works and Housing, Babatunde Fashola, during a courtesy call on him by Bonfrere, said redeeming the pledge was a sign of government’s commitment to integrity.

“This is consistent with the commitment President Muhammadu Buhari has made to make Nigerians proud of the country and to stand by and respond to needs of the citizens.

“But the matter did not go back 24 years. Rather it actually goes back 38 years.

“They were promised houses, but in their own cases they actually received the allocations and they did not have any document.

“So, it was not until April 2017, 38 years after the promise, that they finally got letters of allocation in this administration, which simply shows that the Federal Government is committed to solving problems, no matter how old.

“Change means that the government is solving very difficult and old problems, no matter how long the problems are, be it human, social, habitation needs, including infrastructure.’’

The minister also emphasised that the second housing programme which was currently being constructed in 34 states in Nigeria was also embarked upon under the present administration.

“That again is a sign that even National Housing has seen change,’’ he said.

Handing over the keys to the three-bedroom apartment, Fashola expressed satisfaction over the pledge’s fulfillment and thanked the former coach for his contribution to national development.

He noted that in Bonfrere’s case, he did not get any allocation or the letter, even though he has finally received the house.

According to the minister, beyond housing, the government was also tackling very difficult and old problems.

“I am happy to say that the Bonny Bridge in Rivers, which has been in concession for 32 years after two previous contractors have failed, is now under construction.’’

In his response, Bonfrere expressed profound gratitude to the Federal Government for redeeming the pledge made 24 years ago as a reward package.

He noted that the gesture demonstrated the premium the government placed on integrity of commitments, particularly in relation to honour as a result of outstanding accomplishment by sports teams.

“This gesture will encourage our sportsmen and women to aspire extraordinarily for accomplishments, knowing their accomplishment will not be unrecognised.’’

Bonfrere however expressed his best wishes for the Super Eagles who are set to participate in the 2018 FIFA World Cup in Russia.

“As a coach that was directly involved in the 1994 African Cup of Nations and 1996 Olympics football gold medal victories, I crave for an impressive performance by our Super Eagles in Russia.’’

The former coach called for continued support for Federal Government’s sports programmes and policies, adding that the role of sports as a unifying tool could not be underestimated.

The three-bedroom unit, located at Prototype Housing Estate, Phase II in Gwagwalada, was a fulfillment of the pledge made in 1994 for winning the African Cup of Nations in Tunisia