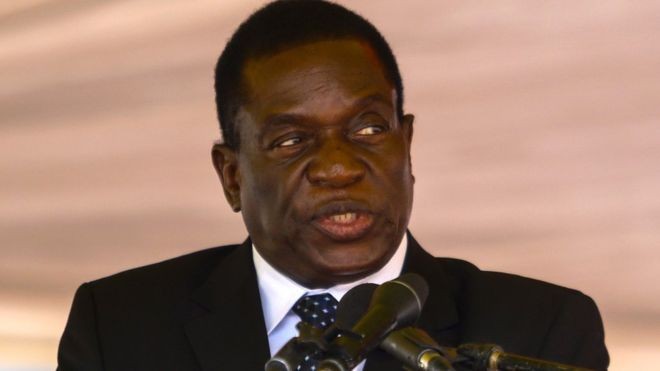 Zimbabwe’s Vice-President Emmerson Mnangagwa has been removed from his post, the country’s government has announced.

His removal makes it more likely that President Robert Mugabe’s wife Grace will follow in her husband’s footsteps as leader of Zimbabwe.

She had earlier called on her husband to remove his vice-president.

“Mr Mnangagwa’s conduct in discharge of his duties is inconsistent with the responsibilities,” the information minister said.

“The vice-president has exhibited traits of disloyalty.”

Mr Mnangagwa, a former intelligence chief, had been a leading candidate to succeed President Mugabe, 93.

His sacking means Grace Mugabe is expected to be appointed vice-president at a special congress of the ruling Zanu-PF party next month.

Mrs Mugabe had earlier called for the party to expel Mr Mnangagwa, according to the state-run Herald newspaper.

Addressing members of indigenous church groups at a rally in the capital, Harare, on Sunday, Mrs Mugabe said: “The snake must be hit on the head.

“We must deal with the real snake behind the factions and discord in the party. We are going for the congress as a united party.”

Last month, she warned of plans to stage a coup, hinting that supporters of Mr Mnangagwa were behind the alleged plot.

Mr Mnangagwa met the president earlier as part of the routine Monday briefing. After another meeting was held with top government officials, a statement was read to the press by the information minister.

It said the president was exercising his authority in accordance with the country’s constitution. The statement is almost verbatim of the one used to fire Mr Mnangagwa’s predecessor three years earlier. It said he had demonstrated “little probity in the execution of his duties”.

Mr Mnangagwa has worked closely with Mr Mugabe for more than 40 years, serving as his special assistant during the liberation war in 1977.

His nickname in the party was the “crocodile”, so-called due to his shrewdness. As yet, he has not commented on his dismissal.

Mrs Mugabe, the head of the Zanu-PF women’s league, and Mr Mnangagwa have been seen as the front-runners in the battle to succeed Mr Mugabe when he dies or steps down.

Mr Mugabe has been in power in Zimbabwe since 1980. He was elected president in 1987, having previously served as the country’s prime minister. He is planning to contest next year’s elections.

Earlier, the youth league of the Zanu-PF party called on President Mugabe to sack Mr Mnangagwa, and to replace him with the first lady. They accused Mr Mnangagwa’s supporters of heckling Mrs Mugabe at a rally in the second city, Bulawayo, and denounced them as “rebels”.

However, the move to appoint Mrs Mugabe as her husband’s deputy in government has been criticised by a leading opposition MP.

In a tweet, Tendai Biti condemned the “dynastic capture of the state”.