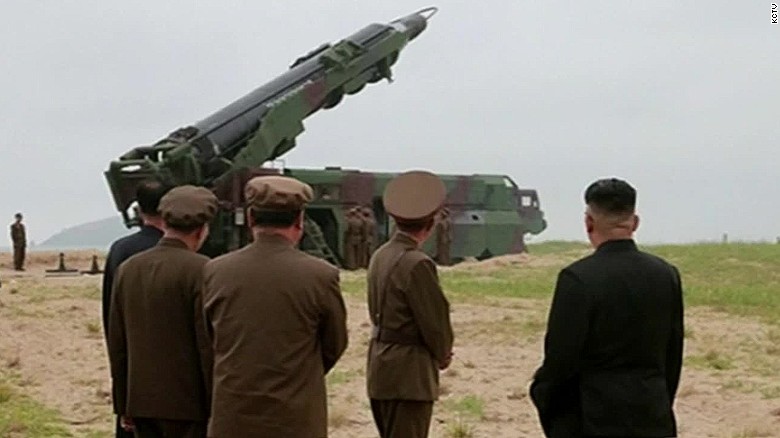 Washington described the device, launched on Tuesday in a watershed moment for Pyongyang’s weapons ambitions, as an ICBM, and independent experts said it was capable of reaching Alaska.

The Korean Central News Agency said that after personally overseeing the test, leader Kim Jong-Un “said American bastards would be not very happy with this gift sent on the July 4 anniversary”, the United States’ independence day.

Breaking into peals of laughter, KCNA said, he “added that we should send them gifts once in a while to help break their boredom”.

Kim had inspected the Hwasong-14 missile and “expressed satisfaction, saying it looked as handsome as a good-looking boy and was well made”.

North and South Korea have been divided since the war on the peninsula ended in 1953 with an armistice rather than a peace treaty, and Pyongyang says it needs nuclear weapons to defend itself against the threat of invasion.

The North’s long confrontation with Washington had entered the “final stage”, KCNA cited Kim as saying, and Pyongyang would not put its nuclear weapons and ballistic missiles up for negotiation under any circumstances, “unless the US hostile policy and nuclear threats come to an end completely”.

The North is subject to multiple rounds of United Nations sanctions over its nuclear and missile programmes, and the launch triggered a new chorus of condemnation.

In response, US and South Korean soldiers fired ballistic missiles simultaneously in a drill Wednesday simulating an attack on the North’s leadership, South Korea’s Joint Chiefs of Staff said, “as a strong message of warning”.

The live-fire training was held at the order of President Moon Jae-In, Yonhap news agency said, who backs engagement with Pyongyang to bring it to the negotiating table.

“President Moon said North Korea’s serious provocation required us to react with more than just a statement and that we need to clearly show our missile defence readiness to North Korea,” it cited Seoul’s presidential Blue House as saying.

For decades Pyongyang has sought to develop a missile capable of delivering a warhead to the continental United States.

Questions remain about whether the North can miniaturise a nuclear weapon to fit a missile nosecone, or if it has mastered the technology needed for it to survive re-entry into the Earth’s atmosphere.

But KCNA said Tuesday’s launch had verified “all the technological requirements including heat resistance and structural stability of the re-entry nosecone”, which it said was made of carbon composite.

“Under harsh conditions involving thousands of degrees of heat, pressure and tremors, the temperature inside the nose cone was stable between 25-45 degrees Celsius,” it said, adding the warhead “flew flawlessly and struck the target precisely”.