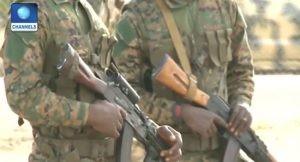 An intruder on Tuesday attempted to gain access into Giwa Barracks Maiduguri, the Borno State capital, through a defensive position at the back of the barracks.

The intruder was challenged by the vigilant troops on guard while trying to gain access into the barracks.

In an attempt to scale over the barbed wire, he was gunned down by the troops at the tango.

In a statement by the Army Public Relations Theatre Command, Deputy Director, Colonel Onyema Nwachukwu, the intruder was gunned down by the troops at the tango.

The statement also adds that investigations are ongoing.

It will be recalled that three years ago Boko Haram had successfully attacked the same barracks, freeing captives held in detention facilities over alleged links with the outlawed group.