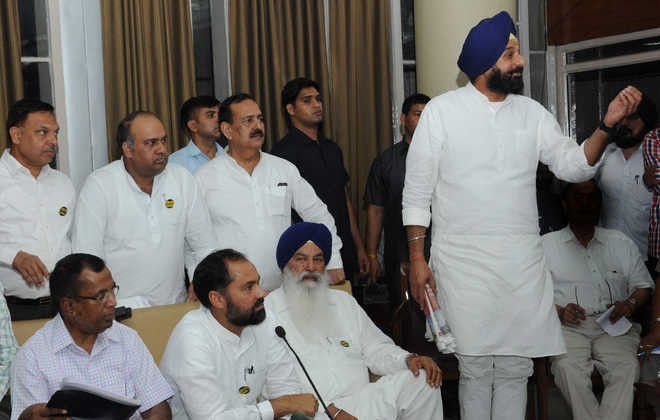 The BJP and AAP on Tuesday demanded an immediate probe into the allegations of a Congress MLA that drugs were easily available in Punjab and hit out at Capt Amarinder Singh government’s claims of combating the drugs menace.
Reacting to the Congress MLA Surjit Singh Dhiman’s statement in Sunam on Monday that drugs were easily available in every street of Punjab, the Leader of Opposition in Punjab Vidhan Sabha, Sukhpal Singh Khaira, said that the Congress government in the state was making “bogus claims” about breaking the drug trade chain in the state.

Speaking to The Indian Express, Khaira said that statement of Surjit Singh Dhiman proves accusations of various AAP leaders that the claims of the Chief Minister that his government had broken the back of the drugs trade were
false.

Later, in a statement, Khaira said that Dhiman has now said it on record that the supply of drugs was interrupted for not more than 15 days after the formation of Congress government that too partially.

“The cat is out of the bag and all claims of Amarinder Singh about weeding out drugs from state fall flat. It is an open secret that there is rampant availability of drugs in Punjab that is killing the youth of state every day,” he said.

The Leader of Opposition said that Dhiman was not a common man, but an elected MLA of the ruling Congress party so the issue must be taken seriously. He said that it is the ground reality in the state that every drug is available in Punjab but on higher rates than earlier.

“Even Chief Minister Captain Amarinder Singh had few days back admitted that the cost of heroin, which earlier was Rs 1500 per gram, has now gone up to Rs 5000 but he did not say anything about discontinuing the supply of drugs,” Khaira said.

He demanded that the Chief Minister must reveal the names of drug traders who he claims have fled the state after formation of Congress government in Punjab.

Khaira added that registering cases against petty drug consumers was not the solution and there was a need to tame the big players in the trade.

He said that the police are arresting only those people who have been pushed into drugs by widespread unemployment in the state.

“Even Sukhbir Badal did the same in the previous government and arrested around 25,000 drug consumers which was just an eyewash to save the big fish,” he said.

Meanwhile, the Punjab unit of BJP too ridiculed the state government following the Congress MLAs statement.
The state secretary of the party, Vineet Joshi said that the statement is credible because it is Congress’ own MLA who is spilling the beans about the flourishing drug trade in Punjab.

“BJP demands that there should be an immediate probe into the allegations made by the Congress MLA and he should name those Congress leaders who are behind the drug racket in the state,” said Joshi.

He also demanded that the Chief Minister as well as the president of Pradesh Congress Committee, Sunil Jakhar, should ask Dhiman about the names of those Congressmen who are giving shelter to the drug traders in Punjab.