Claudio Ranieri Takes Over As Coach At Nantes 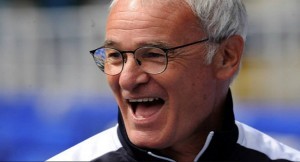 Veteran Italian coach Claudio Ranieri has taken over at Nantes, the Ligue 1 club said on Thursday.

The 65-year-old led Leicester City to their English Premier League title last season, despite facing a number of challenges at the club.

Nantes confirmed that he had signed a two-year contract in what the club described as a “nice coup by the Nantes directors.”

It will be Ranieri’s second stint in France after he led AS Monaco out of the second division in 2012-13 and then to second place in Ligue 1 the following season.

He replaced Portuguese Sergio Conceicao, who led Nantes from the relegation zone in December to a seventh-place finish this season, but then resigned to take charge of Porto in his homeland.

The well-travelled Italian has coached eight different clubs in his homeland, including Juventus, AS Roma, Inter Milan and Napoli, as well as Atletico Madrid and Valencia in Spain; Chelsea and Leicester City in England; and the Greek national side.

Ranieri was sacked by Leicester in February only nine months after leading them to the Premier League title.