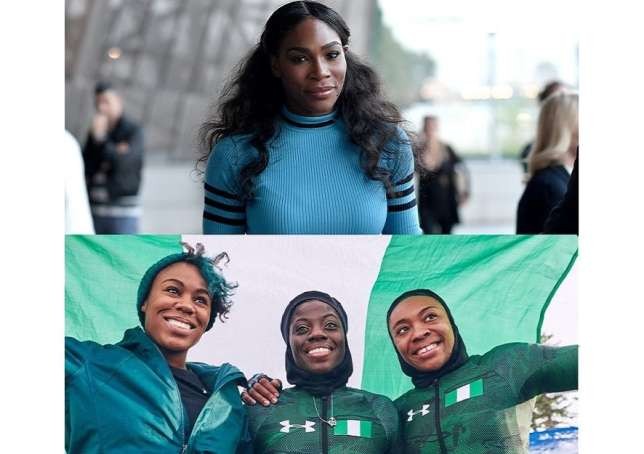 The whole world is celebrating Nigeria for achieving this fate.

The four-time Wimbledon winner and world number one female tennis player, Serena Williams has taken to Twitter to celebrate the Nigeria’s female bobsledding team for making it to the Winter Olympic in South Korea.

Nigeria’s debut in the bobsledding event at the winter Olympics put the nation as the first African country to take part in the event.

More so, it was a female team that made such remarkable achievement hence the celebration of our female sports stars across the globe.

The team is made of the trio of Seun Adigun, Ngozi Onwumere and Akuoma Omeoga. They expressed their determination not to only take part in the games, but also win a media for the country.

Bobsled and Nigeria are not two words which cannot go together due to the climate condition of the country. hence, for a team to represent the African largest economy it worth celebrating.

All the three athletes are not new to competition, despite the winter Olympics being their first outing on the event. All members of the team are former top-flight college sprinters in United States of America. Seun Adugin participated in the 2012 Summer Olympics 100 meter hurdles where she represented Nigeria.

Beats by Dr Dre also celebrated the team for their achievement

Serena Williams is not the only one celebrating the Nigerian trio for making history, the Beats by Dr Dre also highlighted them in the latest push video of its global “Above the Noise” campaign.

In the video, Seun, Ngozi and Akuoma are presented as one of the world’s most ambitious and adventurous athletes in winter sports. The one-minute clip presents three ground-breaking athletes as a portray of maintaining a masterful focus and unwavering drive to represent their countries.

“You can live in your own legacy, but you’ve got to start somewhere. You’ve got to open the door,” one member of the team says in the influential video.

“Our goal is to create a legacy where people will never be limited by the fear of the unknown.”