Ainslie Strikes Back With ‘Big Win’ In America’s Cup 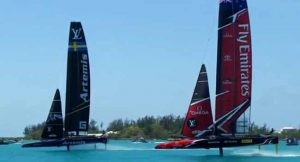 The most successful Olympic sailor ever had struggled for speed and stability in previous races, but in the contest against Artemis, the British crew nailed both.

Ainslie said the team had “made a lot of changes to the boat” overnight, adding that the speed was “a lot better”.

Victory over Artemis, which is led by Ainslie’s close friend Iain Percy, was crucial for Land Rover BAR after suffering four defeats and a near catastrophic crash with SoftBank Team Japan during the early stages of the round-robin qualifying races.

Each of the six teams races the other twice in the head-to-head match race format, with a point for the winner. The challenger with the fewest points at the end of the qualifiers will not go through to the next semi-final round.

It was a bad day for Artemis, who had earlier lost to Emirates Team New Zealand in a rematch of a controversial encounter a day before, when the Swedish crew were incorrectly penalised.

The win gives the New Zealand challenger a fifth victory in their revolutionary catamaran, which features four cycling pedestals to give the sailors the power they need for the hydraulics which control the boats foils and “wing” sail.

Although Artemis had the better start and led for much of the race after a dramatic nosedive by the New Zealand crew plunged their cyclist sailors into the water, the Swedish team then lost ground with a tactical error that cost them the race.

Artemis had Monday’s head-to-head “match race” against New Zealand in the bag before they were penalised by the race umpire at the final mark and had to watch New Zealand sail past them.

The America’s Cup umpires later made the unusual move of admitting they had made a mistake and the race should have belonged to Artemis, but it was too late to change the result.

In the other race of the day, America’s Cup defender Oracle Team USA beat Groupama Team France in convincing style.

The French crew, widely seen as the underdogs in the competition, failed to maintain the momentum from Monday when they claimed a significant win by beating Land Rover BAR.