The ancient game making a comeback 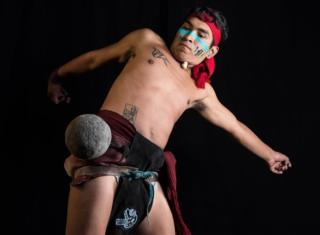 A group of young Mexicans is reviving an ancient ballgame once played by the Aztecs, Maya and Incas.

Ulama was played in Mesoamerica more than five centuries ago before the Spanish conquistadors arrived in the area in 1519.

Players wearing special belts and loincloths pass a rubber ball with their hips. The solid ball can weigh up to 4kg (9lb).

While there are believed to have been many different versions of the game, most are thought to have involved rival teams facing each other, each confined to its half of the court and passing the ball from team to team without dropping it.

In some versions the game was played inside a stone courtyard with vertical hoops, which play a similar role to those in basketball.

While there has been a revival of ulama in some indigenous areas of Mexico, the capital did not have an ulama court until very recently when a cultural centre built one at an old rubbish dump in the Azcapotzalco neighbourhood.

Emmanuel Kakalotl is a coach at the new court. “The game had been forgotten,” he told Agence France Press news agency.

“It was toppled 500 years ago, but now we’re raising it up again,” he explains.

At the new court, women are also taking up the ancient practice.

Twenty-five-year old Beatriz Campos is one of them. “We’re women warriors at heart, because it isn’t easy. Not just anyone can play this sport. It takes a lot of practice, and your body takes a beating,” she says.

Before the match she performs a ceremony burning fragrant tree resin.

Ulama is believed to have had ritual and religious connotations and members of the group playing in Mexico City today don elaborate outfits to perform ceremonies before taking to the court.

They represent different mythological deities such as Mictlantecuhtli, the god of the dead.

The game has been embraced by those playing it at the new court in Mexico City, some of whom say that rather than them “rescuing” ulama, the game has rescued them by giving them a new focus.

All photos subject to copyright.