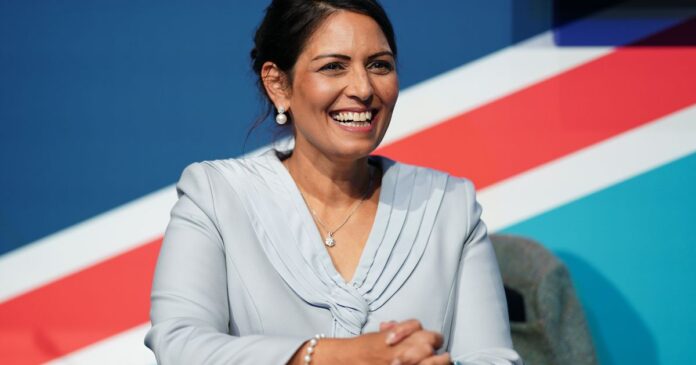 Priti Patel has backed a new campaign to “restore democracy” within the Tory party in a fresh headache for Rishi Sunak.

Brexiteers and Boris Johnson loyalists have set up a campaign to “empower party members” after two Tory prime ministers were toppled in just a few months.

The campaign, called the Conservative Democratic Organisation, takes issue with Sunak’s elevation to Number 10 without a membership vote.

Also read UK News: What Is The Energy Price Cap And How Will Switching To Renewable Energy Help?

The move shows the Conservative Party’s civil war is far from over and comes after HuffPost UK revealed some Tory MPs are privately admitting they have already lost the next general election.

Patel is hugely popular with the party grassroots and several MPs came out to back her amid Johnson’s downfall – although she never entered a bid.

Backing the campaign, the former home secretary described the grassroots as the “heart and soul” of the party.

“They work tirelessly to campaign for Conservative votes, knocking on doors, delivering leaflets, and fundraising locally,” she said.

“They are our greatest assets and advocates and they should never be taken for granted.

“Party members are committed to our values of freedom, enterprise, and opportunity and we need to empower them to have more say over our policies and candidates.

“That will make us stronger, more successful in government, and boost our membership numbers.”

In October, at the Tory Party conference, Patel gave a speech in which she warned MPs against topping Truss in another “divisive” leadership race.

This comes amid a mass exodus of Conservative MPs – including former cabinet ministers Sajid Javid and Matt Hancock – announcing they will stand down at the next election.

Tory MPs are spooked by some recent polls that have given Labour a 25-point lead over the Conservatives.

Against this backdrop, businesses, PRs, and donors are now seeking to establish relationships with the Labour Party.

Donations to the Tory Party have also slumped to their lowest level in two years and the party is reportedly considering hiking its membership fees as it struggles to raise funds.

The movement likened to a Tory version of the left-wing Momentum group, is backed by Tory donor Lord Cruddas and organized by Brexiteer David Campbell Bannerman.

Cruddas, who campaigned to keep Johnson in office and claimed Liz Truss faced a “conspiracy” by MPs, said democracy within the party is “dying on its feet”.

Campbell Bannerman quit the Tories in 2004 and joined Ukip, becoming deputy leader before later defecting back to the Conservatives in 2011.

Sunak entered Downing Street in October following the collapse of Truss’s administration by being elected solely by Conservative MPs.

He lost the leadership race over the summer, after being defeated by Truss in a vote of around 180,000 Tory members.

The organization said the campaign comes after “Tory MPs ousted grassroots favorite Boris Johnson as prime minister” and then “overthrew his successor Liz Truss, voted in by members, and installed her defeated rival Rishi Sunak”.

The campaign has explicitly said it is concerned about the “left of center position” of Sunak and chancellor Jeremy Hunt’s tax plans, while also pointing to “serious concerns about the political views of many Tory MPs elected under David Cameron’s leadership” due to the party headquarters’ powerful role in candidate selection.

The group is drafting a new constitution for the party, which would give local associations the right to choose their parliamentary candidate without interference from Conservative headquarters.

A directly elected party chair is also among the group’s demands, as well as giving members more say in determining party policy at annual conferences.

“Members are being treated with contempt and the party has become grossly over-centralized. We need to rebuild the party from the ground up.”

The campaign emerges as the latest challenge to Sunak’s authority, which has already been forced to compromise over demands from backbenchers on issues such as onshore wind and housing targets.

Over the weekend, backbench Tory MP Lee Anderson also appeared to issue the PM with a veiled threat to quit the party if illegal immigration is not sufficiently tackled.

In an article in the Mail on Sunday, the Ashfield MP warned: “My party can be a force for good in this great country, but it isn’t yet choosing to be.

“If this isn’t solved within the first three months of 2023, we will struggle to retain the red wall seats and my conscience will be severely tested because I want to stand as a Conservative candidate representing a party that will put the interests of my constituents before the thousands of illegal immigrants arriving here every month.”

The chancellor is also facing calls from 40 MPs to cut government spending on equality, diversity, and inclusion initiatives.

A letter, first reported by the Telegraph newspaper, has been sent to Hunt, citing a forthcoming Conservative Way Forward report claiming that billions of pounds are being spent on “politically motivated and divisive activities”.

Senior MPs including Sir Iain Duncan Smith, Sir Jake Berry, and David Davis are among those to have signed the letter, which complaints about the scale of taxation introduced by Hunt’s autumn statement.

“We will have a much better chance of cutting taxes or spending more on frontline public services if we end this sort of waste.”

The chancellor is understood to be open to considering the Conservative Way Forward report as part of a wider efficiency review.