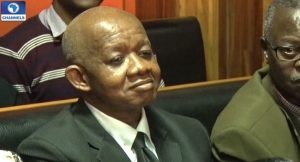 The decision followed a meeting of the NJC to review the suspension of the said judges after a raid of their residence by the Department of State Services (DSS).

The Council noted that out of the eight suspended judicial officers, only three have been charged to court.

The NJC also noted that the trial of Justice Ademola had been concluded and he has been discharged and acquitted of the charges filed against him.

In view of this, the NJC decided that the various heads of court should direct the other judicial officers to resume duty, as there were backlogs of cases in their various court for the past eight months.

The judges recalled by the Council are Justice Ademola, Justice John Okoro of the Supreme Court, and Justice Uwani Aji of the Court of Appeal.