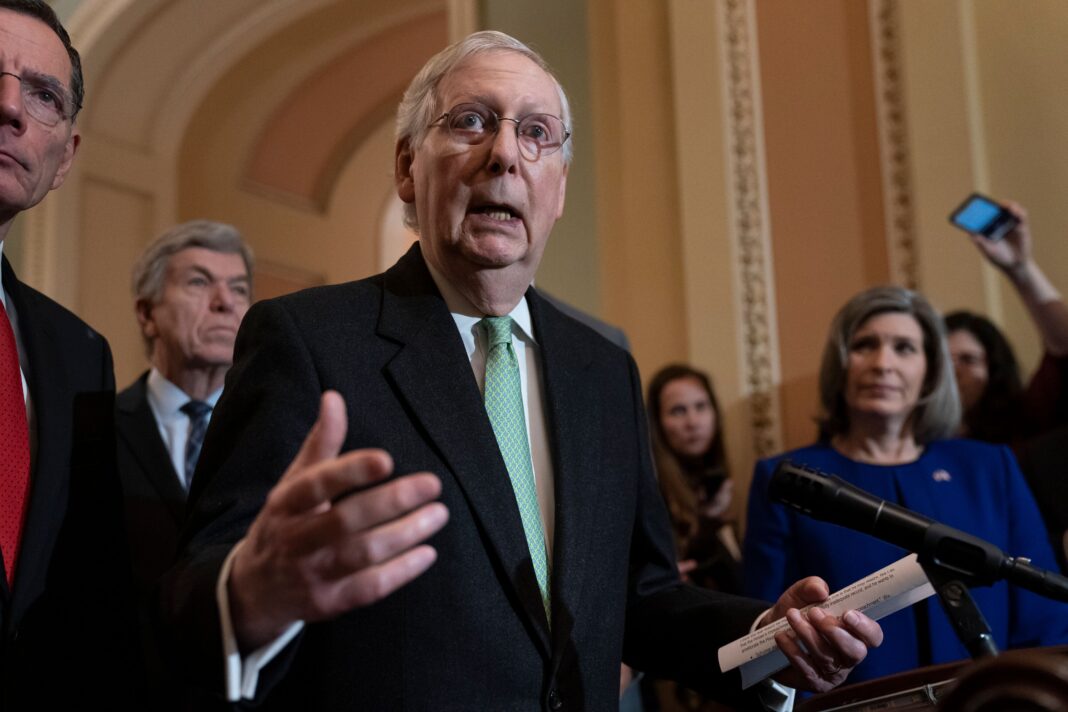 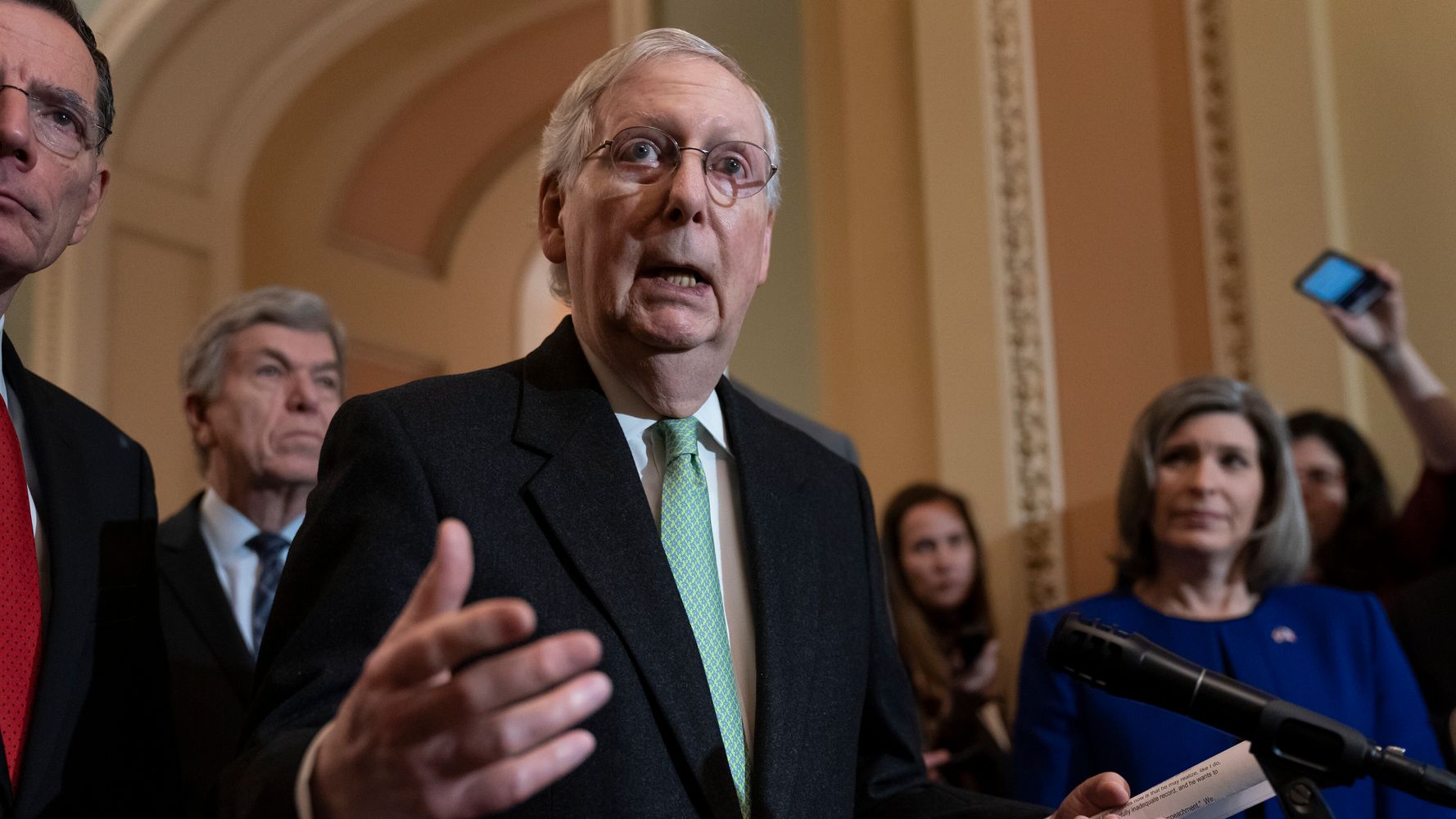 WASHINGTON (AP) — The top Senate Republican on Thursday denounced the “unfair” House impeachment of President Donald Trump and reassured Trump and his supporters that “moments like this are why the United States Senate exists.”

Sen. Mitch McConnell said in remarks on the Senate floor that the House impeachment “risks deeply damaging the institutions of American government,” saying the Democratic-controlled House “has let its partisan rage at this particular president create a toxic new precedent that will echo well into the future.”

The Kentucky Republican accused House Speaker Nancy Pelosi of being afraid to send “their shoddy work product to the Senate” after she threw uncertainty into the impeachment process late Wednesday by refusing to say when she would send two impeachment articles to the Senate for a trial.

The House impeached Trump on two charges—abusing his power and obstructing Congress—stemming from his pressure on Ukraine to announce investigations of his political rival as he withheld U.S. aid

McConnell said the two articles failed to meet the constitutional standard of high crimes and misdemeanors and that the House simply impeached a political foe for abuse of power offense that isn’t considered a crime.

McConnell described Trump’s impeachment as “the most rushed, least thorough, and most unfair impeachment inquiry in modern history.”

“The framers built the Senate to provide stability,” McConnell said. “To keep partisan passions from boiling over. Moments like this are why the United States Senate exists.”

A trial in the Republican-controlled Senate would almost certainly result in Trump being acquitted of the charges.

In a news conference late Wednesday after the impeachment vote, Pelosi declined to say when she would send the articles to the Republican-led Senate. Until the articles are submitted, the Senate cannot hold the trial.

McConnell was meeting later Thursday with Democratic Leader Chuck Schumer to begin negotiations on how to conduct next year’s Senate trial. The two leaders have a poor relationship and McConnell holds a tactical edge if he can keep his 53-member Senate majority united.

A day after his impeachment, Trump was quick to lash out at Pelosi.

“Now the Do-Nothing Party wants to Do Nothing with the Articles & not deliver them to the Senate,” Trump tweeted Thursday morning. He claimed the timing of the trial was up to the Senate, and that if Democrats didn’t transmit the articles of impeachment “they would lose by Default!”

But there is no Constitutional requirement on Pelosi to send them swiftly_or at all.

Pelosi said House Democrats could not name impeachment managers — House prosecutors who make the case for Trump’s conviction and removal from office — until they know more about how the Senate will conduct a trial.

“We cannot name managers until we see what the process is on the Senate side,” Pelosi said. “And I would hope that that will be soon. … So far we haven’t seen anything that looks fair to us. So hopefully it will be fair. And when we see what that is, we’ll send our managers.”

McConnell rejected a proposal earlier this week from Schumer, D-N.Y., to call several witnesses. McConnell also said that he is coordinating with the White House and declared that “I am not an impartial juror.”

Pelosi said that McConnell “says it’s OK for the foreman of the jury to be in cahoots with the lawyers of the accused. That doesn’t sound right to us.”

White House press secretary Stephanie Grisham blasted Pelosi’s move that would potentially delay the Senate trial, where she said Trump was sure to get a “fair shake” compared to the House.

In an interview with ABC’s “Good Morning America,” Grisham said Pelosi’s announcement was “Just another gimmick and more changing of the rules.”

Asked again if she could guarantee that she would send the articles to the Senate, Pelosi said at the news conference: “That would have been our intention.” But they will see what the Senate decides, she said.

“We are not having that discussion. We have done what we set out to do,” Pelosi said.

Complicating any decision to delay are House Democrats’ arguments in recent weeks that Trump’s impeachment was needed “urgently,” arguing his actions were a threat to Democracy and the fairness of the 2020 election.

Rhode Island Rep. David Cicilline, a member of Pelosi’s leadership team, said after her remarks that Democrats want impeachment proceedings that are “judicious and responsible and deliberative.”

He said that while Senate will decide its own procedures, “the speaker’s only point is before she sends it over she needs to understand what that is” because it will influence who the impeachment managers are.

Asked about never sending the articles over, Cicilline said, “I would not speculate that anyone’s even contemplating that.”