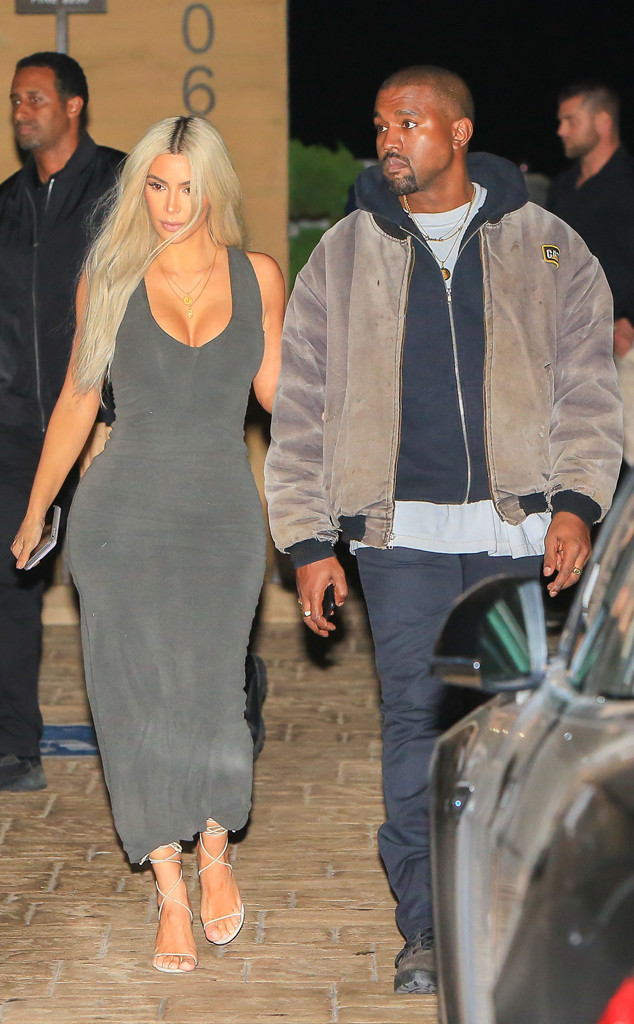 No kids, no family, just the two of them!

Kim rocked her bod’ in a skintight bodycon dress and kept her accessories to a minimum with a pair of gold chain necklaces. The trend-setting reality star paired the simple look with a sexy pair of lace-up stilettos by Merah Vodianova.

Her hubby braced a workman’s look, opting for a grey work jacket by Caterpillar, black pants and black boots.

Kim and Kanye left son, Saint, nearly two, and North, four, at home for their night out.

In September, Kim confirmed that the family of four are happily expecting a third child via surrogate in the near future. Earlier in the evening, Kim stopped by Jimmy Kimmel Live in Hollywood where she was interviewed by guest host Jennifer Lawrence, a vocal fan of Keeping Up With the Kardashians.

During the wide-ranging interview, the pair shared plenty of laughs such as when they discussed light-hearted topics including farting, stalking exes and late-night drunk dinners and the weirdest thing ‘Ye does.

“He falls asleep anywhere,” she explained to the Oscar winner. “We’ll be at a meeting or he’ll introduce me to people I’ve never met before, we’ll be at a restaurant and he’ll be snoring at the table.” The twosome packed on the PDA at sister Kendall Jenner’s 22nd birthday party at the taco bar Petite Taqueria in Los Angeles on Thursday night.

Previous articleSinger, Ruby Gyang celebrates her birthday with stunning new photos, writes open letters to her younger self, her daughter and her current self
Next articlePhoto of actresses Funke Akindele-Bello and Lolo at a party in Lagos today