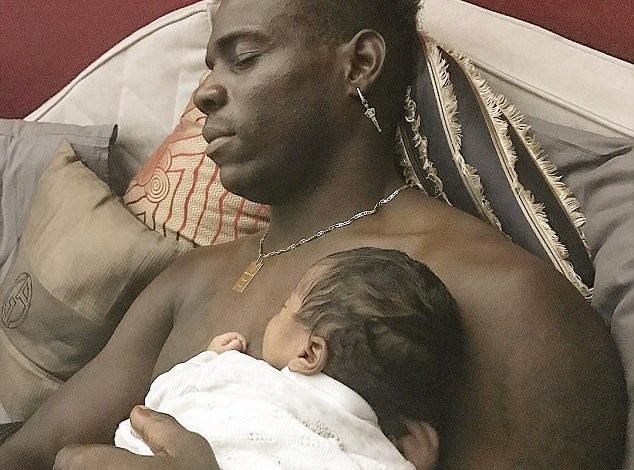 Mario Balotelli has welcomed the birth of his second son, Lion, with a photograph posted in the build-up to Nice’s Europa League clash with Lazio this week.

Reports in Italy last month claimed the former Liverpool and Manchester City striker’s girlfriend Clelia had given birth to a baby boy named Lion, in Zurich.

And now Balotelli, 27, has posed with his second child for the first time to confirm the news. Lion, at almost three weeks old, is a brother to the forward’s four-year-old daughter Pia.

Balotelli had previously kept quiet about the pregnancy, although he did take to Instagram in September to share a snapshot of a pregnant woman’s belly, alongside the simple caption: ‘Loading’.

On this occasion, his post read: ‘Good night #Father&Son’.

The eccentric striker, whose nomadic career has taken him through Italy, England and France, recently claimed to have matured after the controversies that plagued his early career.

He said: ‘I haven’t changed. I’ve matured, I’m growing. I’m not 17 anymore, with experience you grow.

Super Mario has been loved up with girlfriend Clelia and reports in Italy claimed she gave birth to his son named Lion in Zurich last month.
The 27-year-old has now released the first image of himself and Lion, who is now three weeks old.
Balotelli also has a four-year-old daughter named Pia with former girlfriend Raffaella Fico.
The Italian has been in great form for Les Aiglons, who have helped to revitalise his career.
After hitting 15 league goals last term, Balotelli has five in five to start this campaign, despite the team struggling in the bottom half of the table.
It’s a different story in the Europa League though as Nice sit joint-top with Lazio after two games on six points in Group K.
Victory at the Allianz Riviera will all but confirm their place in the knock-out stages of the competition.
While Balotelli will hope to continue his prolific form to convince Giampiero Ventura to consider him for an Azzurri recall ahead of the World Cup.

Nice host Lazio on Thursday night in the Europa League with both sides on six points after winning their opening games against Vitesse Arnhem and Zulte Waregem.
In 2012, Balotelli featured in GQ, where he was named the second-best dressed man in the world behind British musician Tinie Tempah. Balotelli also appeared on the cover of the November 2012 edition of Time Magazine.
Balotelli is a fan of mixed martial arts, as he has stated in the past that he would love to compete in the sport professionally if he were not a footballer
In January 2013, Balotelli’s net worth was estimated to be US$40 million,up from US$25 million in January 2012.