ICYMI: Shut up or I expose your wife, Amaechi threatens Wike 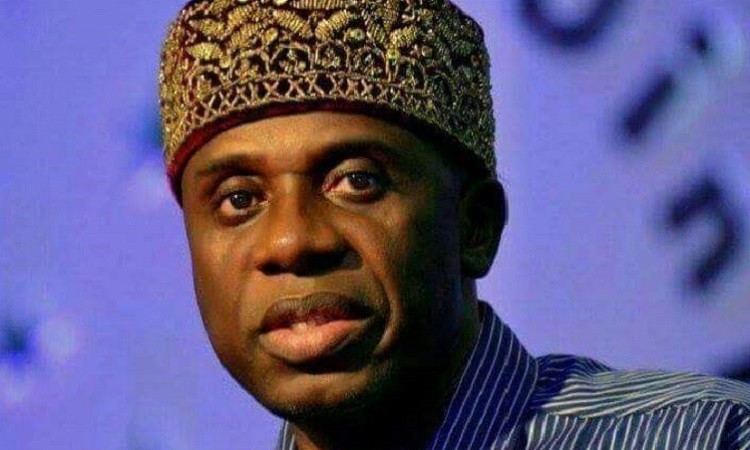 The Minister of Transportation, Rotimi Amaechi, on Tuesday verbally attacked his successor, Governor Nyesom Wike of Rivers State, and threatened to expose the governor’s wife “if he (Wike) does not shut up his mouth.”

Amaechi, who was visibly angry at the allegation levelled against his wife by the Rivers governor, also described his successor as a thug who could hardly speak good English.

But when asked to react to this while speaking on the sidelines of an inspection programme at the Kaduna Dry Port, Amaechi replied, “By accident of Goodluck Jonathan, I don’t want to attribute it to God, but by the accident of Jonathan, the man takes office and talks rubbish. My wife and family, including my younger brothers and sisters, no one had access to government when I was governor.

“Even as minister, nobody will have such because it is not a family business. It is government business. But the problem with Nyesom Wike, and I want you to state this if he doesn’t shut up his mouth and do his work I will bring his wife to the focus. You see I’ve been very matured not to talk about his wife.

“But if Wike does not close his mouth and talk about my wife anymore, I will bring out his wife. My wife will never do such, we don’t do family business. I care about transparency. My wife is a trader. She buys and sells and Wike knows that.”

When asked why he was also accused of squandering over N30bn belonging to Rivers State, Amaechi said, “And you believe that? The man who says he has about $50m in Lagos and could no prove it is the same man you believe. The man who said I didn’t pay salaries until I left office and now he is saying no, it is pensioners that I didn’t pay. Do you believe such a man?

“Do you think such a man is well? You believe Nyesom Wike is well? First, he doesn’t know how to speak English, he is poorly dressed, he is a thug, and you bring me to focus with that kind of a man?”

On the decision of the Rivers government to handle some of the issues levelled against him in court, the transportation minister declared that his team was not given fair hearing by the panel set up in the state.

Amaechi said, “Which court, okay let him go to court. He has no fact and he maligns people’s character. The process is that you set up a tribunal, but we’ve questioned the tribunal, we were not given a fair hearing.

“Again, how do you know how the court came to its decision? We were not even informed. There is a panel of justices in Rivers State, which is the Court of Appeal. But by the time we knew it, they took away that matter from them and gave it to a panel that came from Adamawa.”