Hilarious things your favourite wine says about you 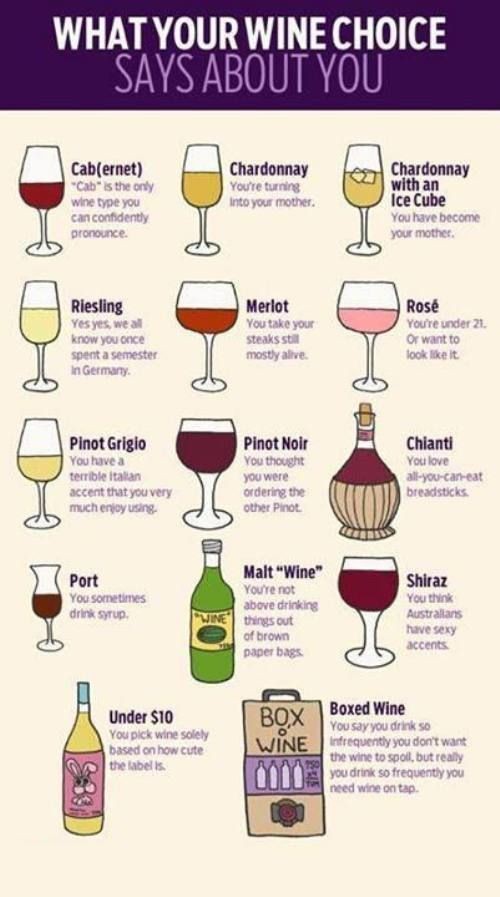 Wine is one of the world’s greatest joys. Happy? Celebrate with wine. Sad? Drown your sorrows. Hungry? Wine for dinner.

But the wine family is a broad one, with lots of different branches. What does the type of wine that you order say about you?

Sweet Rosé
This isn’t wine. This is alcoholic Ribena. It has nothing to do with wine, and shouldn’t be allowed to be sold as it. So, stop pretending and have a Bacardi Breezer.

New Zealand Sauvignon Blanc
You like to think that you know lots about wine. You actually don’t. Or maybe you just really enjoy things that were trendy in 2012.

House white
There’s no pretension here. You want to get pissed in a nice, cheerful way, probably in a pub garden. Bit of ash in your glass? Never mind. Fly floating in it? Oh well. Okay, occasionally you end a night-out by being sick on your own shoes, but hey, who cares?

House red
Everyone else wanted a bottle of white, but no, you want red. You said something about it being better for your prostate or your eye health or similar, so everyone agreed to it. Now you’ve all got purple teeth and you want a nap because the red wine drinker is a health nerd.

Actual Rosé
This is more forgivable than super sweet syrup Rose, but let’s be honest, Rose is the Diet Coke of wines.

Prosecco
Despite the fact that you get a tiny glass, and it costs more, and it tastes like shower gel, you Prosecco drinkers seem committed. You probably work in human resources, go running every evening, don’t drink during the week and would really rather be having a G&T but wanted to get in on a shared bottle.

Malbec
I don’t want to scare you, but you’re a grown up. You order wine from the wine list by reading the actual description rather than just picking the second cheapest so you don’t seem like you’re poor.
You’ve probably got an actual corkscrew at home, and have even been known to have one glass and then put the bottle away. Some people would imply that you’re boring…

Chardonnay
You’re not bothered by the Chardonnay stigma of the Bridget Jones era. You’re a maverick. An independent thinker. A rogue. Or you’ve just realised that Chardonnay is legitimately delicious and the wine community’s best-kept secret.