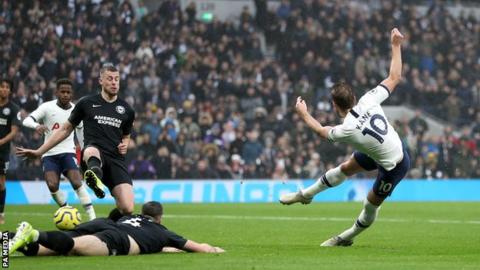 Football News: Tottenham renewed their pursuit of a place in the Premier League top four as they came from behind to beat Brighton in north London.

The result temporarily lifts Spurs up to fifth in the table, three points behind fourth-placed Chelsea who host Southampton later on Thursday.

Adam Webster had given the visitors a richly deserved lead, heading in from Pascal Gross’ right-wing delivery towards the end of the first half.

However, Spurs, who played at a pedestrian pace during the first period, raised their tempo after the interval to fight back.

And Dele Alli’s sublime lobbed finish then found the top left corner to complete the turnaround.

It ensured Brighton’s miserable record on 26 December continued – with the Seagulls now winless in their last 11 games on this date.

Tottenham won 60% of their Premier League matches while finishing fourth last term and although this win ensured an improvement (71%) on that ratio during Mourinho’s first seven games in charge, the Portuguese boss still faces a significant challenge to steer his side into a Champions League place at the end of the season.

Defeats against Manchester United and Chelsea have been damaging in that respect and Tottenham went into this match needing 15 victories from their remaining 20 games just to replicate last season’s 71-point tally.

But the manner of this victory and the second-half performances of Kane, Alli and Lucas Moura will at least provide Mourinho with optimism.

Mourinho had won just one of his last 21 Premier League matches when his side trailed at the interval but that trio galvanised Tottenham after the break, prompting their recovery.

Brazil winger Moura was pivotal to that, instigating many of Tottenham’s attacks and helping to shift the momentum of the game.

While in Kane, Spurs have one of the deadliest finishers in the top flight.

The England forward had the ball in the net with his first chance midway through the first half, but the video assistant referee deemed he was offside when receiving Harry Winks’ long pass.

Kane was then brilliantly denied by Ryan, but exhibited his predatory instincts to drive in a follow-up and bring up his eighth goal in five Premier League games on 26 December.

Alli, who covered more ground than any other home player, continued his and Spurs’ resurgence under Mourinho, with an exquisite finish to register his fourth Premier League goal under his new manager.

This felt like a typical Brighton performance throughout, one brimming with promise and endeavour but ultimately lacking the cutting edge required for them to profit from their free-flowing passing.

A bright start by the visitors saw Colombia midfielder Steven Alzate twice manoeuvre into good positions in front of goal.

Having been reprieved by VAR – when Kane’s first-half goal was disallowed – Brighton then put themselves in the position to win for the first time on 26 December since 2005.

Webster reprised the role played by Guy Butters that day, climbing highest from Gross’ exemplary delivery from the right to nod the ball into the bottom left corner.

It was no more than the visitors deserved and in many ways it was emblematic of the first half, with stationary marker Toby Alderweireld unable to stop his man.

And while Gross twice went close to earning his side a point from distance – with Gazzaniga saving both – his efforts represented the Seagulls’ only two shots on target after the break and underlined where they had fallen short again.

‘Our spirit was fantastic’ – what they said

Tottenham manager Jose Mourinho: “The spirit in the second half was so important. We did not start very well, we scored a beautiful goal which was offside and then they went on and scored. Brighton were very difficult to control. Our spirit was fantastic. We made some adjustments in the second half, we equalled their numbers in midfield and that gave us more possession. It was hard until the end but very important.

“We cannot lose two in a row, the work-rate was really brave. I told the boys to focus on this game and to give every last piece of energy we have. I think when you lost a game it hurts. If you are not hurt then you are not committed. You need to be emotionally strong. You need to recover quickly and that did not happen today. It was hard. Fantastic spirit by the players.”

On Brighton: “I want to say that Brighton were good – tactically. They can adapt, they can change. They are very dangerous on set-pieces.”

Brighton manager Graham Potter, speaking to BBC Sport: “I thought it was quite an even game in terms of shots and chances. You would expect Tottenham to have a bit of pressure. We are disappointed to come away with nothing. Those fine little margins, little details we need to do better.

“I thought we had some good moments in the half and we contributed to a good first-half performance. The little details you need to go your way they didn’t. We need to dust ourselves down and go again. We need to stick together, stick to what we are doing and move forward.”

Shots on Target
Home5
Away5

Attempt saved. Dele Alli (Tottenham Hotspur) left footed shot from the centre of the box is saved in the top centre of the goal. Assisted by Harry Kane.

Attempt missed. Harry Kane (Tottenham Hotspur) right footed shot from the left side of the box misses to the right. Assisted by Dele Alli following a fast break.

Dele Alli (Tottenham Hotspur) wins a free kick in the defensive half.

Attempt saved. Pascal Groß (Brighton and Hove Albion) right footed shot from outside the box is saved in the top left corner. Assisted by Leandro Trossard.

Harry Kane (Tottenham Hotspur) wins a free kick in the defensive half.

Attempt missed. Aaron Mooy (Brighton and Hove Albion) right footed shot from outside the box is just a bit too high following a set piece situation.

Lucas Moura (Tottenham Hotspur) is shown the yellow card for a bad foul.

Pascal Groß (Brighton and Hove Albion) wins a free kick in the defensive half.

Goal! Tottenham Hotspur 2, Brighton and Hove Albion 1. Dele Alli (Tottenham Hotspur) right footed shot from the right side of the box to the bottom left corner. Assisted by Serge Aurier.

Attempt missed. Dale Stephens (Brighton and Hove Albion) right footed shot from outside the box is too high following a set piece situation.

Attempt saved. Pascal Groß (Brighton and Hove Albion) right footed shot from outside the box is saved in the bottom left corner.

Pascal Groß (Brighton and Hove Albion) wins a free kick in the attacking half.

Adam Webster (Brighton and Hove Albion) wins a free kick in the defensive half.

Attempt missed. Pascal Groß (Brighton and Hove Albion) left footed shot from outside the box is high and wide to the left. Assisted by Aaron Mooy.