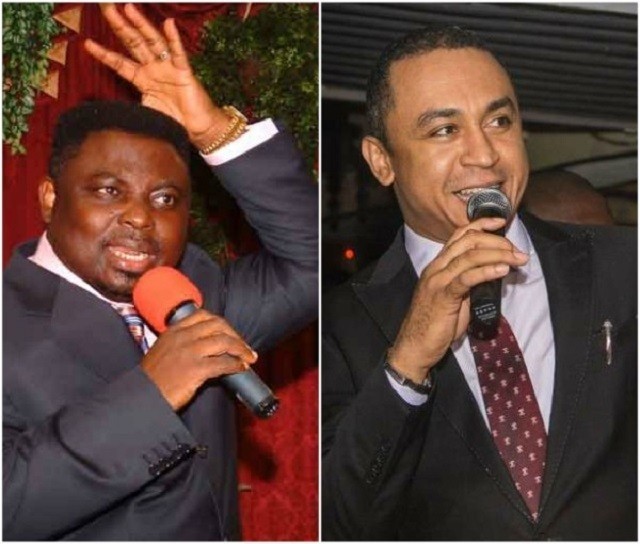 Daddy Freeze has come out with all guns firing as he makes a reply to the KICC Pastor who called him out in one of his sermons.

Just like we predicted, controversial On-Air Personality, Ifedayo Olarinde, alias Daddy Freeze, has fired back at the Senior Pastor of the Kingsway International Christain Centre [KICC], Pastor Mathew Ashimolowo, who called him a ‘Yoyo, wife beater, drunkard, and divorcee’.

Daddy Freeze, the leader of the FreeTheSheeple Movement, an organization where he has been campaigning against tithing and offerings because he believes men of God use same to enrich themselves, has been taking on powerful pastors in Nigeria almost on a daily basis.

He has had issues with the likes of Pastor Enoch Adeboye, Bishop David Oyedepo, Pastor Paul Adefarasin and Apostle Johnson Suleman and this time, Pastor Ashimolowo has fallen into his radar.

Shortly after Ashimolowo made the comments about the Cool FM presenter, Daddy Freeze went to his social media account to fire back, using Biblical verses to support himself.

“See the way he is defending tithing with so much passion; I hope this same passion is extended to bringing home our brothers who are currently enslaved in Libya.

I didn’t hear ONE single bible verse, just sentiments, and emotions in this defense.

Who is this ‘Yoyo’ now? Mention his name make we know am. And I hope there is proof to back these allegations up and they are not just ‘hearsay’ from a false interview conducted on an embattled pot of stale bitter leaf soup.

Whoever the ‘yoyo’ is, one thing is certain, he cannot determine what the body of Christ believes, only the BIBLE can do that. So until you can come out with a superior argument to explain where Jesus, our high priest, or the disciples, our first pastors collected tithes, it looks like the ‘yoyo’ is the one speaking the biblical truth and no amount of subbing or name calling can override the scriptures.

If the ‘yoyo’ drinks alcohol, let’s remember Jesus drank alcohol too. He was called a drunkard by the Pharisees. The teachers of religious law who burdened the people with unbearable religious yokes and put up similar fights when Jesus drove the money changers out of the temple!

A man can’t be seen drinking pap, Fanta or Lucozade and be called a drunkard, can he? ~FRZ

‘The Son of Man came eating and drinking, and you say, ‘Here is a glutton and a drunkard, a friend of tax collectors and sinners.’

‘The Son of Man has come eating and drinking, and you say, ‘Behold, a man, a glutton and a drunkard, a friend of tax collectors and of sinners!’

‘The Son of man is come eating and drinking; and ye say, ‘Behold a gluttonous man, and a winebibber, a friend of publicans and sinners!’

‘The Son of Man has come eating and drinking, and you say, ‘Look, a glutton and a drunkard, a friend of tax collectors and sinners!’

‘The Son of Man has come eating and drinking, and you say, ‘Look! He’s a glutton and a drunk, a friend of tax collectors and sinners!'”

10 things Nigerian women don’t know about Nigerian men There are a lot of things for women to figure out in men, here are ten of them
Tyrese threatened The Rock’s daughters on social media
Daddy Freeze Pastor Humble Okoro invites OAP for deliverance in Abuja stadium
David Moyes West Ham appoint former Everton boss as new manager
policeman who arrested Evans shot dead by kidnappers In Lagos
In Poland Pole dies after setting himself on fire in protest Passers-by tried to put out the flames with fire extinguishers, but the man was rushed to hospital in a serious condition
Touching video of 8-year-old girl who suffered a brain aneurysm responding to her mother’s voice in the hospital
‘When a man calls you a whore, call his mother a whore too..it hurts them so bad’ – Anita Joseph speaks out against slut shaming
NSCDC arrests 5 persons with 2 truckloads of suspected stolen diesel In Delta State
Okada rider in Oyo state beats up female corps member for putting up a fight as he attempted to rape her (photos)
‘Mugabe must go’ See the mammoth crowd that came out to protest against Zimbabwe’s Robert Mugabe today (photos/video)
Christianity on Sex What does the Bible actually say about premarital sex? We look at nine bible verses concerning sexual relations before marriage.
Man commits suicide in Delta after girlfriend dumped him
Chris Oyakhilome daughter &amp; boo are engaged!
Here’s the man whose girlfriend burned his brand new car after he broke up with her
Study: 59% of People Haven’t Checked If the Equifax Breach Affected Them
In China You get arrested for preaching the gospel This country is ranked 39 on Open Door USA’s World Watch List for countries suffering religious persecution.