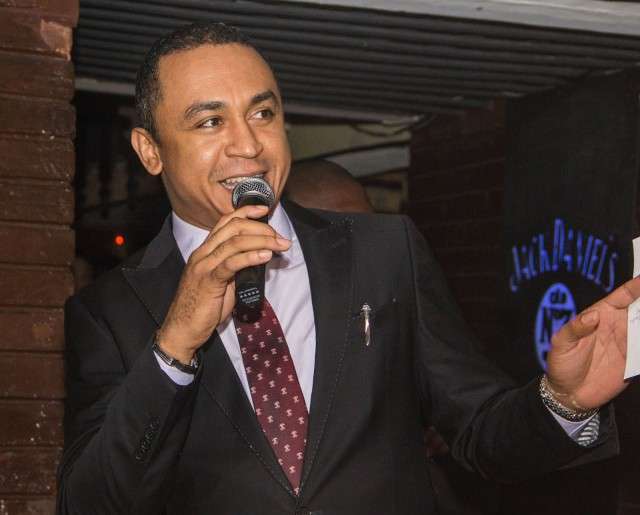 Pastor Humble Okoro of the Joy Christian Church, Port Harcourt, Rivers State, appears ready to deliver radio presenter, Daddy Freeze of a bunch of demons he claimed to have possessed the latter.

The clergyman who is also known as the 52 Demons Container made the announcement via a poster published on Instagram. It included details of their meeting which was set to hold at the Abuja National Stadium on any day desired by the OAP.

It seemed like a joke to some IG users while others discouraged Daddy Freeze from accepting the invitation claiming the pastor is fetish.

“@daddyfreeze pls run from all dis babalawo, they up for something. Don’t say I didn’t warn you,” an Instagram account owner with the profile name “xcel_b_thyname” wrote.

Some doubted if the confident man of God can engage the presenter in an intellectual discussion related to Christendom.

The intention of Okoro has been made quite clear. He wants to be prove to Nigerians that the OAP is indeed possessed by 52 demons. He previously made the assertion in an interview with Street TV where he was quoted:

“This young man use to insult pastors- they call him Daddy Freeze. That fair boy! That boy is not normal! I saw about 52 demons inside him. I can help him!”

Daddy Freeze has come under attack mostly from church ministers for his eye opening but condemned preaching against tithing which he considers a brainwashing strategy to milk Christians of their hard earned money.

He condemned the fact that some clergymen live a life of affluence while their congregation lavish in penury.

Chris Oyakhilome daughter &amp; boo are engaged!
At least 20 people shot as gunman opens fires during church service n Texas
Christianity on Sex What does the Bible actually say about premarital sex? We look at nine bible verses concerning sexual relations before marriage.
We really love each other but our parents are being difficult
In China You get arrested for preaching the gospel This country is ranked 39 on Open Door USA’s World Watch List for countries suffering religious persecution.
Photos: The Kano-based priest who quit Catholic Church recently got married? See his supposed wedding photos!
Lil Tracy – Demons
Bride-to-be is left heartbroken after another lady appears in church to claim she’s dating her partner (Photos)

Study: 59% of People Haven’t Checked If the Equifax Breach Affected Them