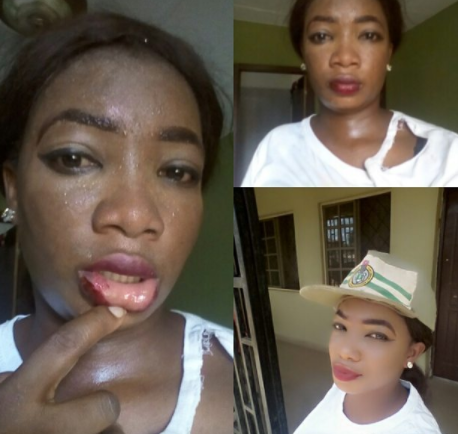 A Female Corps member serving in Oyo state mamed snowwhite2911 on IG, today narrated how she narrowly escaped a rape attempt by an Okada rider – who beat her up as she put up a fight in resisting him. She wrote;

‘I got the greatest shock of my life today when I was almost raped by an okada man. I got dressed up left my house heading to the Secretariat in another community nt up to 30kms away frm my PPA, b4 I enter d bike d man said he wants to use the bush that he is having running stomach then I agreed and waited when he was done we left getting to some point around 4kms he stopped and said he wants to use d bush again.

‘Not wasting much time he came back start asking me, how much am I paying ? I told him it’s a fixed price na that’s nt wat we should argue abt when he insist I said it’s #300 which is d normal price we pay he said no dat I will pay him #1500 stopping at d junction for 8km and to my destination #2000 so felt uncomfortable wit d way he was acting that was wen I told him ok he should tak me back to where he picked me he said wat abt d fair I said I will pay him I want to collect money frm my friend to pay him d #2000 then he refused and said if I don’t av money he has to take advantage of me using the “f” word then I got scared, tried running away.

‘Everywhere is full of bush where will I run to self no houses, no cars and was already frightened which even made me got weak. He ran after me got me and I engaged in a fight with him bcos I had no choice, then he dragged me and pushed me down to d bush corner started rough handling me, hit me lips wit a blow I started bleeding frm d mouth, he tore my uniform. I was only shouting Jesus Jesus save me save me then at a point he left me and drove off with his bike. I jst believe that God intervene in my battle bcos I see no other reason why he would av left me nt accomplishing his aim to rape me and didn’t collect my fone or any belongings. On the other hand govt should scrap this nysc or stop posting corpers to remote areas.’