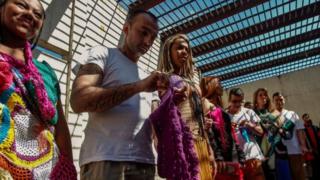 Glamorous locations and top name designers are what the models from the São Paulo Fashion Week are used to but on Wednesday they instead showed off creations by unheard-of designers in the less than inviting setting of the Adriano Marrey maximum security jail.

A prison courtyard with bars instead of a roof became an impromptu catwalk as the models showed off colourful crochet tops adorned with dangly tassels.

The proud designers and creators of the pieces crowded around the walls to admire each other’s work. Some of them were still finishing off their latest creations.

For the creators dressed in regulation khaki trousers and white T-shirts, the pieces were rare bursts of colour against the grey prison walls.

The unusual show is part of a project to rehabilitate inmates by teaching them to crochet.

The programme has been running for three years and is the brainchild of Brazilian fashion designer Gustavo Silvestre.

Inmates who join the programme get their sentences reduced by one day for every 12 hours of the course they complete.

Many of the inmates are serving sentences for crimes such as drug trafficking or robbery. One of them is Felipe Santos da Silva who told Agence France Press news agency that crocheting “calms me down, it helped me overcome smoking and using drugs”.

Another inmate, 41-year-old Fidelison Borges, said the event had helped lift his self-esteem.

“I was proud of myself seeing my creation being modelled and even more proud to know that people liked that piece that I made,” the convicted robber said. 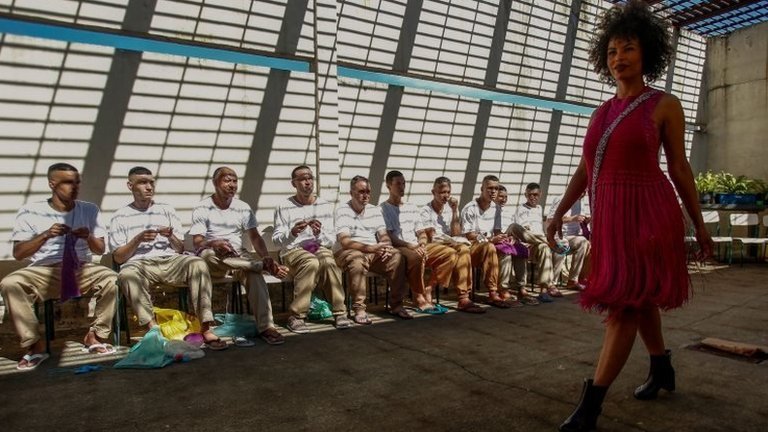