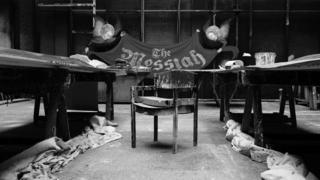 When the lights go down and curtain goes up, the eyes of the theatre audience are trained on the actors treading the boards.

But behind the scenes, a small army of rarely-seen people are central to bringing a production to life.

Of those, he picked 100 black and white photographs for a new exhibition which opens this week.

Production – Behind the Scenes at Birmingham Repertory Theatre runs from 27 June to 5 August 2019 at Medicine Bakery and Gallery, in New Street, Birmingham.