Volcanic eruptions on the Indonesian resort island of Bali prompted officials to cancel flights and move about 24,000 residents out of the way as a thick ash cloud from Mount Agung, thousands of meters high, drifts east and southeast along the archipelago.

Indonesia’s Center for Volcanology and Geological Hazard Mitigation raised its aviation notice from a red alert to a green one on Monday, indicating the potential for a larger eruption is imminent.
Over the weekend, residents were evacuated from 224 points around the island while Lombok International Airport on Pulau Lombok, the island due east of Bali, closed temporarily, said Ari Ahsan, spokesman for Ngurah Rai International Airport in Bali. At Ngurah Rai, Bali’s main airport, flight cancellations stranded roughly 7,000 domestic and international passengers, according to the airport’s latest report.
Amid worsening conditions Monday, Jetstar Airways canceled all flights in and out of Bali. 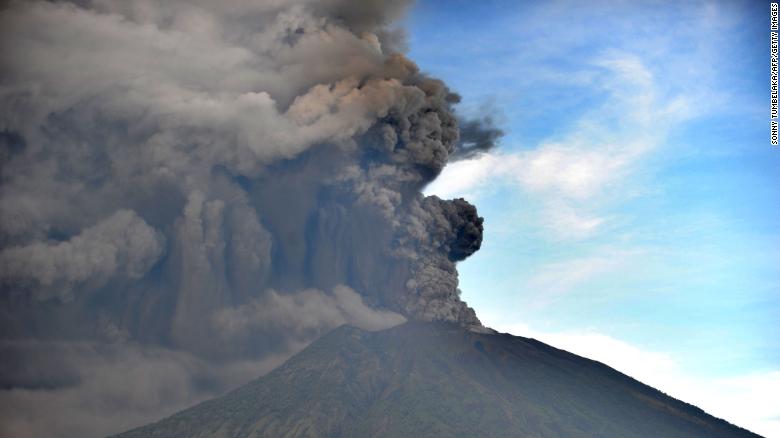 Mount Agung sent smoke rising thousands of meters into the air, shutting down flights.
The ash, which began spewing into the sky after Mount Agung in eastern Bali erupted three times Saturday, has reached heights of 4,000 meters (about 2.5 miles), according to Sutopo Purwo Nugroho, head of information and data for Indonesia’s National Disaster Management Agency.
The first eruption came around 5:30 p.m. Saturday, Bali’s Regional Disaster Management Agency said. More eruptions followed and continued into Sunday, with a “medium-pressure eruption” in the early evening that sent ash 2,000 meters into the air, the agency said.
The volcanic ash plume reached an altitude of 7,600 meters (4.7 miles) late Saturday, according to Australia’s Bureau of Meteorology. Ash fall was reported in the villages of North Duda, East Duda, Pempetan, Besakih, Sidemen, Tirta Abang, Sebudi, Bhuana Amerta in Klungkung and in some villages in Gianyar. Masks are being distributed in Bali and Pulau Lombok. 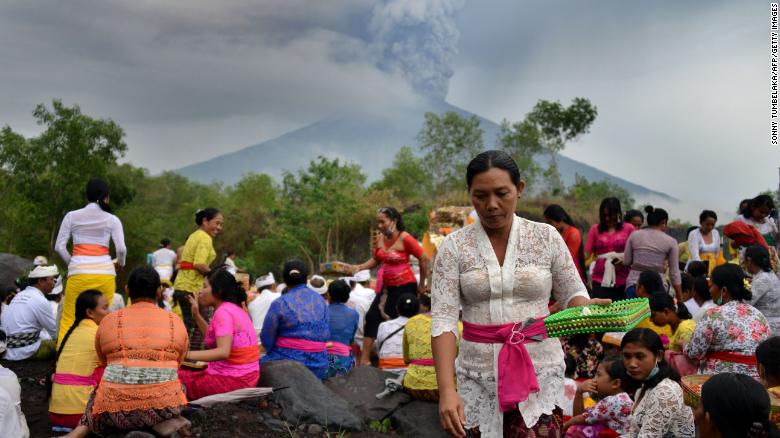 Balinese Hindus pray near Mount Agung in hope of preventing a volcanic eruption Saturday.
By Monday, the National Agency for Disaster Management issued a Level 4 alert, recommending no public activities within 8 to 10 kilometers from the peak. Anyone within that distance of the peak was advised to evacuate.
Arsenal seek to consolidate at the Emirates
Jersey Island gives conditions for return of $300m Abacha loot
In France British woman dies after fall from riverboat A British woman died Saturday night after falling from a boat which hit a beacon in the Rhone river in Avignon, southern France, emergency services said.