Arsenal seek to consolidate at the Emirates 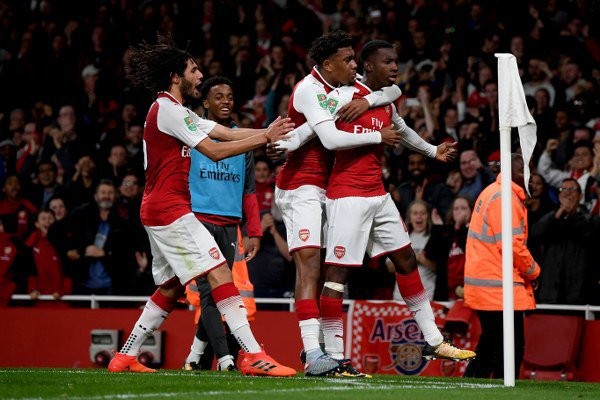 Operation maintain the tempo is likely to be Arsenal Manager Arsene Wenger’s charge to Carabao Cup hero Eddie Nketiah and his teammates, as the Gunners resume their quest in the premier league Saturday.

Eddie Nketiah, born 20 May 1999, became the first player born after Wenger took charge as manager in October 1996 to score a competitive goal for Arsenal. He did not only score but made it a double to fire the Gunners into the Quarter finals of the Carabao Cup.

Interestingly the Emirates landlords have recorded victories in their last five matches and will be hoping to continue the party as the host Swansea at the Emirates.

Elsewhere Manchester United’s Manager Jose Mourinho may as well be free to sip champagne as it has been reported that Harry Kane will be missing in action for Spurs no thanks to injury.  Kane has been in killer form of recent and perhaps would have played the role of tormentor in chief at Old Trafford in his quest for more goals to add to his current 17 goals in 13 matches.

It will be a neither here nor there case for Liverpool as hosts of premier league new comers Huddersfield Town. Fresh from a 4-1 demolition by Tottenham Hotspur, Liverpool will rather prefer to flash back and remain in that mood where they handed Maribo 0-7 bashing in the Champions league. Prior to that it has been celebration of draws by the Jürgen Klopp tutored side. It might be fair to predict that Huddersfield Town will lose having lost three of their last four matches but after pulling a 2-1 victory against Manchester United against initial permutations who says they cannot insist on earning a point at the Anfield on Saturday. League leaders on cruise control, Manchester City will be guests of West Brom, their goalless draw against Wolverhampton in the Carabao cup came to many as a surprise even though they advanced to the next level in the competition. I suppose many had expected them to continue the victory song after victories against Chelsea, Stoke, Napoli and Burnley. Perhaps Saturday’s tie will re-open the goal feast against a team that is yet to record victory in five matches.

All eyes will definitely be on Chelsea away to AFC Bouremouth. With Nigeria international still sidelined the Blues go into the match fresh from two victories against Watford and Everton and this is likely to serve as a ginger to Antonio Conte’s side. Interestingly hosts Bouremouth are equally going into the match on the heels of two victories against Stoke and Middlesborough, this also will a tunic for the Eddie Howe and the boys. It no doubt promises to be action packed Saturday and predictors are already at work and you can join them what do you think?