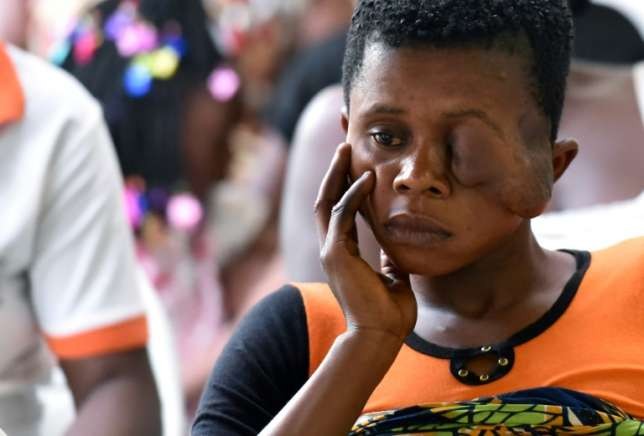 For 17 of her 20 years, Flora Doume has hidden from the world. Now she nervously waits for the operation to repair her ravaged face, restoring her hope for a normal life.

She was three years old when she became a victim of noma — a vicious gangrenous disease that starts with tiny ulcers around the mouth and then spreads, often devouring lips, flesh and muscle.

In Flora’s case, a growth covered her eye, then spread to the left-hand side of her face, forcing her to hide from a world that shunned or mocked her.

“I stayed indoors all the time. I can’t read or write, I never went to school, I can’t work,” Flora said, ahead of the operation at a private clinic in Abidjan, the economic capital of Ivory Coast.

Noma gets its name from the Greek word nomein, “to devour,” and is a bacterial disease that kills nine out of 10 patients, according to the World Health Organization (WHO).

The disease — Latin name cancrum oris — occurs mainly in young children with weak immune systems and destroys the mucous membranes of the mouth and other tissues, causing survivors to be severely disfigured, often with gaping holes in their faces.

There are an estimated half a million cases around the world, most of them in Africa, according to the WHO.

It can be successfully treated — but only if identified in time, and if drugs and the right nutrition are available.

“It’s a disease of poverty, of malnutrition, of people who live in poor hygiene conditions,” said Spanish surgeon Angel Emparanza, who specialises in facial surgery.

Since 2003, he has regularly travelled to Kenya, Nigeria, Ivory Coast or Burkina Faso to carry out life-changing surgery for patients with little or no access to health care.

“It’s a disease. But in the villages, many people blame it on devils or witchcraft. They banish people who suffer from it,” he said, referring to Flora as an example.

The mocking and insults directed at victims can have devastating social and psychological consequences.

Waiting for her operation, Flora mulls over her regrets, including never being able to have a boyfriend.

“How do you want me to know love?” she said.

“When I went out, people laughed at me.”

In the previous week, Emparanza and a team of other volunteers from the Sourire Un Jour (To Smile One Day) association saw more than 100 patients, operating on around 50.

About 30 patients with disfigured faces, often with no lips, nose or gums, wait on plastic chairs at the La Rochelle clinic in Abidjan.

“Patients are ashamed to go out. Everyone looks at them. Imagine the humiliation,” said Tieu Huberson, president of a group for handicapped people in the region of Danane, who himself is blind.

Huberson says the group has tried to work with village chiefs to educate the local population and believes surgery can transform the physical and mental well-being of patients.

“Flora was in tears when the doctor said she was going to be operated on,” he said.

“We said she was a beautiful girl. It was the first time in her life that she’d received a compliment.”

Among the patients waiting for treatment is young Abdourahim, who suffers from a cleft palate and plays with his mum Habiba Sawadogo.

“There is still some work to be done but I am happy. I didn’t have the money for the treatment,”she said.

Sourire Un Jour‘s help for the destitute includes everything — the operation, food and transport from the patient’s home town to the hospital.

In a nearby room, Herman Goue, 19, smiles with difficulty as he recovers from surgery, where doctors have taken skin from his throat and grafted it onto his face.

He says he is relieved and eager to see how he looks.

Some days later, after a complex surgical procedure, Flora is also in a recovery room.

After years of fearing the mirror as her enemy, she has just seen her new face.

“I am happy,” she said. “I’m going to be able to have a husband and children.”

Wellness How to improve the quality of your skin naturally When it comes to the clearing of skin, lemon is supreme. It is one of the best ingredients that can be used to promote skin condition.