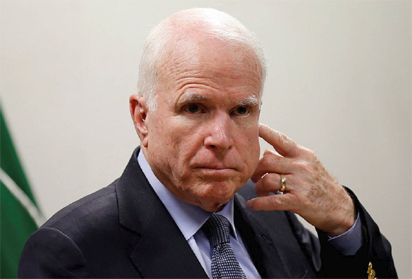 The scar above John McCain’s eye and purplish bruise on his face stood as evidence that all was not normal in the US Senate.

But the veteran Republican lawmaker, who announced last week he was suffering from brain cancer, nevertheless made a triumphant and emotional return Tuesday, showing glimpses of the fiery passion that has defined his long career.

In dramatic style, the maverick McCain made his colleagues wait for it.

The other 99 senators erupted in applause and cheers when the 80-year-old strode into the chamber half an hour into an extraordinarily tense showdown over health care reform, walked to the center well and cast the final vote.

It was the first time that most had seen McCain since the shock news that the Arizona senator — who stared down his torturers in a Vietnamese prison and rose to become the 2008 Republican presidential nominee a generation later — was now facing the fight of his life against an aggressive cancer.

He took advantage of the moment to deliver a stern message to his colleagues in the body that has lost many of its bipartisan traditions: shape up, and quick.

“We’ve been spinning our wheels on too many important issues because we keep trying to find a way to win without help from across the aisle,” McCain said, as most senators sat listening at their desks — a respect seldom afforded these days to a lawmaker addressing the body.

The latest deliberations are “more partisan, more tribal, more of the time than at any time than I can remember,” he said.

“I hope we can again rely on humility on our need to cooperate, on our dependence on each other, learn how to trust each other again, and by so doing better serve the people who elected us.”

It was a stirring speech, and most senators rose to hug the warrior-senator afterwards.

“There’s no one in the Senate like John McCain,” Senator Chris Murphy, a Connecticut Democrat who was not yet born when McCain was shot down over Hanoi, told AFP.

“I’m glad he’s back, and I hope that it lifts his spirits to be back on the battlefield.”

If only the political battles he is facing could be less ideological.

McCain has been a reliably even-keeled voice in an increasingly partisan chamber, a lawmaker whose quick temper has never prevented him from working with Democrats to craft important bipartisan policy.

He entered the Senate in the mid-1980s, and while he brought his military hot temper to Washington, he appreciated the comity and compromise of the upper chamber.

He described himself as conservative, though he has never been ruled by party orthodoxy.

But the US political tones shifted, culminating with the verbal jabs of one Donald Trump, who beat all expectations and became president.

In 2015, Trump angered millions when he said McCain was not a war hero because he was captured.

But on Tuesday, the billionaire president changed his tune, thanking him on Twitter “for coming to D.C. for such a vital vote.”

McCain, who said he would spend “a few days” in Washington before returning to Arizona for more treatment, looked back with fondness on his Senate service Tuesday, calling it “the most important job I’ve had in my life.”

But he also implored colleagues — in his own coarse way — to use more civility and compromise.

“Stop listening to the bombastic loud mouths on the radio, television and internet,” McCain boomed. “To hell with them!”