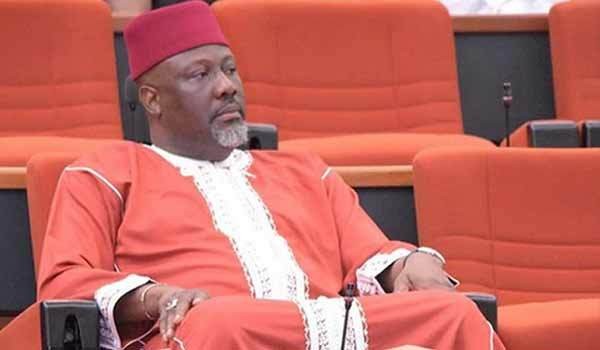 A group, Civil Society Network Against Corruption, has written a petition to the Economic and Financial Crimes Commission demanding the investigation of the lawmaker representing Kogi-West senatorial district, Senator Dino Melaye, and Justice Akoh Ikpeme.

An online news medium, Sahara Reporters, had on Tuesday released an audio clip in which the judge, who was handling an election petition involving Melaye and Senator Smart Adeyemi of the Peoples Democratic Party, allegedly demanded a bribe from Melaye in dollars.

In a petition signed by its chairman, Mr. Olanrewaju Suraju, the group, on Thursday, urged the commission to urgently commence a high-powered investigation by a team of forensic experts into the allegation.

The petition read in part, “In the recordings which capture the telephone conversation between Justice (Mrs.) Akoh and Mr. Melaye, at two different times, the judge is overheard asking Mr. Melaye to give her a bribe in US dollars.

“She also sought Mr. Melaye’s assistance for a person he repeatedly referred to as her ‘daughter’ to secure a job at the Cross River State Ministry of Health, with the senator reassuringly bragging that he had already spoken to Governor Ben Ayade.

“It is worth noting that sometime in 2016, Justice Ikpeme dismissed a petition by Smart Adeyemi, Mr. Melaye’s opponent at the 2015 Kogi-West senatorial district election — in accordance with the plot of reaffirming the alleged electoral infractions associated with the emergence of Mr. Melaye.”

The coalition stated that in view of the gravity of the allegations, the EFCC must urgently commence a high-powered investigation by a team of forensic experts into the allegations.

The CSNAC said the fight against corruption would remain deficient in the face of unbridled electoral fraud and manipulation if nothing was done.

Efforts to get Melaye’s reaction did not succeed. Several calls made to Melaye’s phone to react to the publication were not picked. One of our correspondents also sent a text and WhatsApp message to the lawmaker to either confirm or deny the tapes but he did not reply any of them.

Melaye had, however, denied bribing the judge, adding that the voice recording was fake.

The lawmaker had, in a message on his official Twitter handle, said Sahara Reporters was fabricating lies against him because he had sued the medium and the case was about to come up for mention in court.

He said, “Sahara Reporters and ‘awada kerikeri’; using voice-over to malign me because my case with them comes up in few days’ time, June 5, 2017.”

Meanwhile,   the Senate has kept mum on the judge-bribing scandal.

Abdullahi, could not be reached for comments on the matter. He did not pick several calls made to his telephone lines between Wednesday and Thursday.

YOU MAY ALSO LIKE: On Dino Melaye, the Senate’s job is not done

Asking not to be quoted, a senator told one of our correspondents that there was no way the Senate would be involved in the matter as it was ‘personal’. He recalled that involving the Senate in such a matter led to the suspension of a former Majority Leader, Senator Ali Ndume (Borno-South).

The Senate had suspended Ndume for calling on the Senate to probe an allegation made in a report by Sahara Reporters that Melaye did not graduate from the Ahmadu Bello University. The lawmakers had referred the matter to a panel, which exonerated Melaye and recommended Ndume’s suspension.

The source said, “How do you expect anybody to raise such a matter in the Senate? That means no lessons have been learnt from what happened to Senator Ndume. It is a personal issue. In fact, it a mere allegation and it does not mean it is a fact. The Senate should be involved in more important national issues and not this one.”