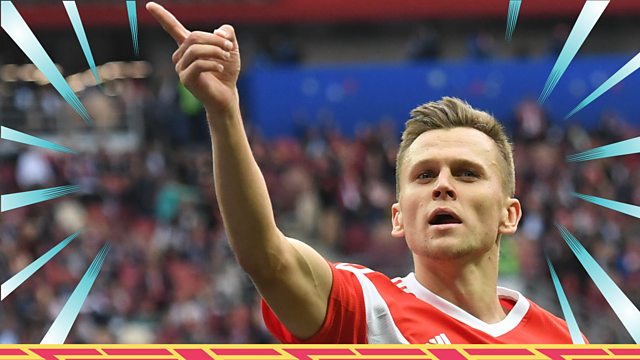 The 2018 World Cup opened in spectacular fashion as Russia defied their recent poor form to smash five past Saudi Arabia and record the biggest win by the host nation in the opening game of a World Cup since 1934.

Stanislav Cherchesov’s team had not won in their past seven matches and had been criticised from all sides, including a series of barbed comments from Russian president Vladimir Putin.

But in front of a largely partisan crowd of 78,011 at the Luzhniki Stadium they never looked in danger against a naïve Green Falcons’ side that seemed only too willing to gift possession to their opponents.

A completely unmarked Yuri Gazinsky headed his first goal for Russia before substitute Denis Cheryshev evaded several weak challenges and smashed home at the near post close to half-time.

The tempo slowed and the atmosphere flattened after the restart, giving the whole thing the feel of a friendly match.

But substitute Artem Dzyuba illuminated a match of often dubious quality with a precise header to extend his team’s lead just minutes after replacing Fedor Smolov.

And as the match moved into injury time the impressive Cheryshev smashed home with a crisp strike into the top corner before the superb Aleksandr Golovin curled a free-kick around the wall.

It put the seal on a sensational and unexpected start to the World Cup for the hosts – and gives them a real chance of qualifying from the group stage.

Singer Robbie Williams performed during a colourful opening ceremony before the match, marking the start of a feast of football that will see 64 games played at 12 venues over the next month.

Williams went through several of his biggest hits in front of a largely appreciative crowd that featured football fans from all over the world as well as a large Russian contingent.

A lengthy address from Putin was followed by a short speech from Fifa president Gianni Infantino – but eventually the words ended and the football finally began.

Russia went into the match ranked 70th in the world, three places below their opponents, and with a side ravaged by injury problems.

Key forward Alexander Kokorin plus defenders Georgi Dzhikiya and Viktor Vasin have all succumbed to knee injuries this year – with the lack of options seeing Cherchesov dragging 38-year-old centre back Sergei Ignashevich out of retirement and into the side.

It had led the Moscow Times to proclaim the team was “doomed to fail” while another sports writer said only “a miracle” could save Russia.

But they were the vastly superior team here on a mild Moscow evening, repeatedly overrunning opponents who were simply unable to handle their physical threat and determination.

The impressive Golovin provided the crosses for the headed goals and Roman Zobnin went close with a low strike that Abdullah Al-Mayoof saved low down.

Cheryshev was excellent too, running down the left flank with a real sense of purpose, as Russia put in a performance that gives them a renewed sense of purpose as they try to get out of a group that will provide much sterner tests against Egypt and Uruguay.

There was nobody of the calibre of Mohamed Salah and Luis Suarez on the pitch on Thursday, and the ageing Ignashevich can expect a much rougher ride in the next two games.

And there was one sour note for the home side when Alan Dzagoev limped off with what looked like a hamstring injury midway through the first half.

But on a night when they were under serious pressure to deliver, Russia got their campaign up and running in emphatic fashion.

Thursday’s match was crucial for each side’s aspirations of qualifying from the group and the result leaves Juan Antonio Pizzi’s team with a huge task in front of them.

They made an aging and out-of-form Russia look like world beaters and seemed to be arguing among themselves from the early stages as they were repeatedly caught out of position.

There was no finer example of this than Russia’s opener, as two completely unmarked players stood side by side as they awaited Golovin’s cross.

Pizzi is the team’s third coach since they qualified for the World Cup and, despite numerous training camps and plenty of positives in narrow recent defeats against Italy and Germany, they seemed woefully undercooked.

Mohammed Al Sahlawi headed narrowly wide with a rare first-half attack and a decent cross shortly after the restart eluded both Al Sahlawi and Taiseer Al Jassam at the far post but they were isolated moments of intent.

In their first World Cup campaign since 2006, and searching for their first win at a World Cup since 1994, they will need to show a vast improvement if they are to take anything home from this competition.

He scored the fifth goal, provided two assists and showed some real quality in possession.

‘A big and unexpected defeat’ – what they said

Russia coach Stanislav Cherchesov said: “Sometimes it’s a source of joy for the fans, sometimes less so. However, we are honest in what we are doing. I was relaxed yesterday and I’m relaxed today because I know my players. It is a pleasure to work with them.

“Every coach depends on the players, this is why I am relaxed. Why do I have to be stressed?

“I would like to underscore that we are grateful to our squad with how they fulfilled our goals, how they played in a relaxed game under the pressure stemming from this being an opening match.

“But Egypt will be a different game, city and stadium, We need to meticulously prepare ourselves.

“We have made the first step, then there is a stronger opponent. We don’t know if Mohamed Salah is going to play [for Egypt]. With him or without him it is a respectably strong team, with him stronger obviously. It is just a different adversary.”

Russia’s Denis Cheryshev, who scored twice, said: “There are no words to express what I’m feeling right now.

“I’m happy we’ve won but we shouldn’t stop there.”

Saudi Arabia coach Juan Antonio Pizzi said: “It was a tough game and we suffered a big and unexpected defeat.

“Russia did very well, while we did not appear to be in good shape. I don’t believe that the opposing team has done anything to surprise us – I think that a poor performance explains the result.

“As for our strategy, we must change. We have to forget about it now and think of the next match. I have confidence in these players.”

Shots on Target
Home7
Away0