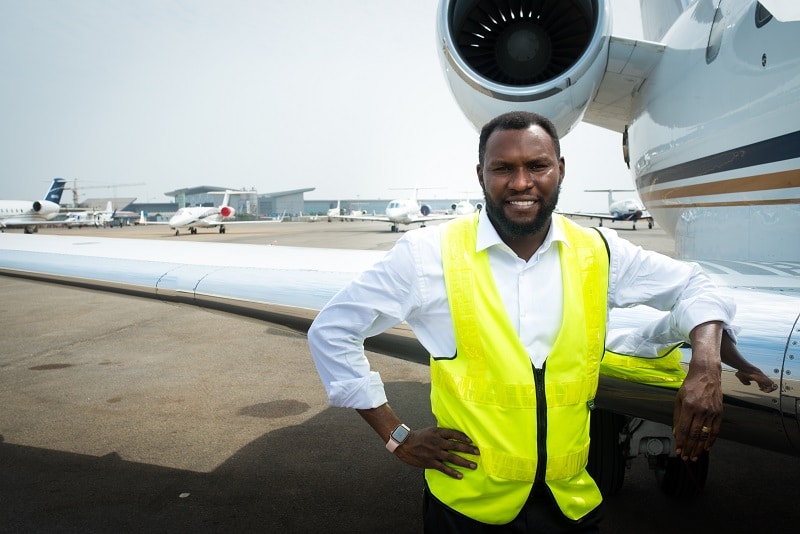 Nigeria news : Aircraft Engr, Isaac Balami features in Pleasures Magazine, tells success stories, challenges [PHOTOS], The commercial aviation industry is a highly complex space, where a large number of entities are involved in the delivery of travel products and services, which is sometimes manifested in a single product from a customer perspective. These actors are often collaborating and partnering to be able to co-deliver value and meet the expectation of customers. According to International Air Transport Association (IATA) statistics, from the moment passengers search online for an air ticket to the time they arrive at their destination, the airline is just one of around 26 business partners involved in the aviation chain. 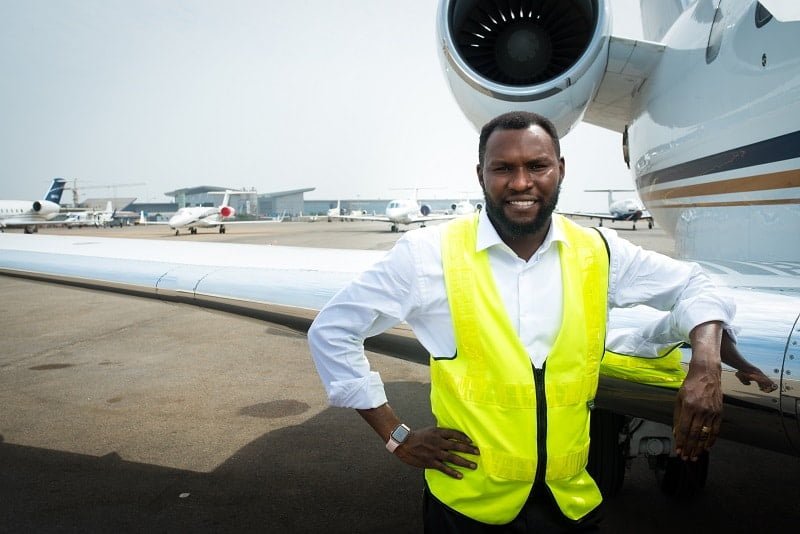 Would you board a plane if you know it had very poor maintenance record? Would you put your life in the hands of an airline that uses defective parts for its aircraft? If you answered no to both questions, then you would appreciate the importance of other players involved, especially the aircraft maintenance industry.

Basically, the safety of air travel relies on the assurance of quality manufacturing of aviation equipment and its maintenance that ensure that complex and sensitive puzzles have to sit perfectly together for the success of each flight that takes place anywhere in the world. 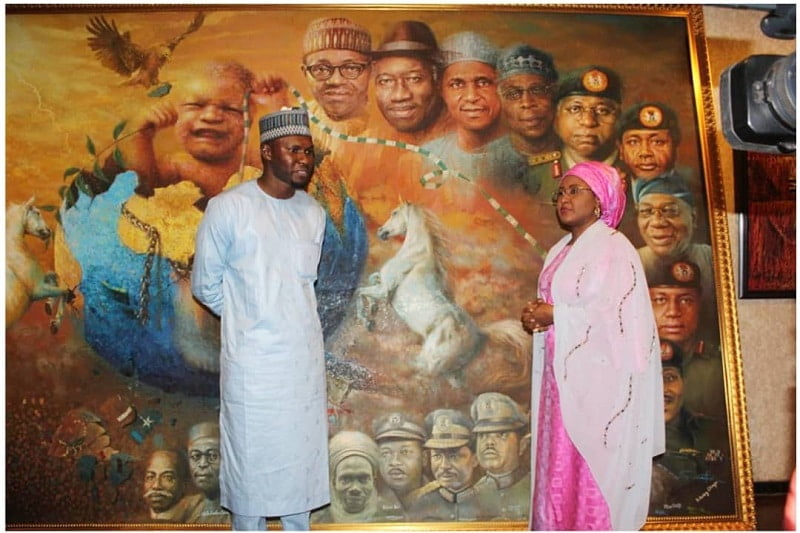 Truth be told, aircraft maintenance, repair, overhaul and modification services have a long history of been seen as a ‘white man profession’ but there seems to be a paradigm shift in the profession with inspirational success stories from Africans who have great passion and love for all the aviation industry.

In fact, it is not out of place to state that with the new crop of top African aircraft talented aircraft engineers with excellent technical knowledge blazing a path forward, it’s been difficult for the industry not to sit up and take note of the shift. 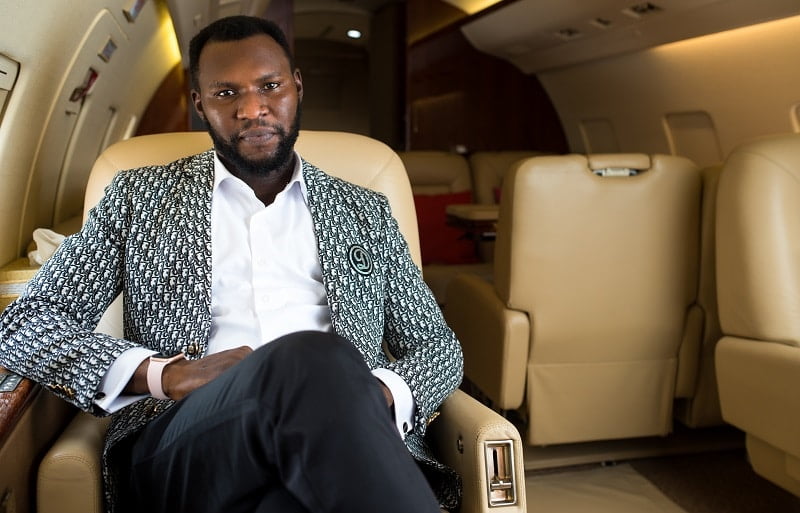 Therefore, to deepen the importance of celebrating ‘’Great Success’’ stories in Africa and also correct the wrong impression that whenever the continent is mentioned it is only a prism of war, corruption, disease, poverty, and hunger PLEASURES Magazine presents the theme of the March/April 2020 issue of your deluxe Pan-African Entrepreneurial and Luxury magazine: “Paradigm Shift”, a special edition to celebrate the success story of Isaac Balami, the founder and Chief Executive Officer of 7 Stars Global Hangar, the first-ever Aircraft Maintenance Repair and Overhauling Facility in the West African sub-region who has also excelled greatly as the President of the National Association of Aircraft Pilots and Engineers.

As earlier mentioned, once a White man’s turf, aircraft maintenance, which encompasses the performance of tasks required to ensure the continuing airworthiness of an aircraft or aircraft part, including overhaul, inspection, replacement, defect rectification, and the embodiment of modifications, compliance with airworthiness directives and repair. Balami, who once worked as a painter and soak-away evacuator who is taking the world by storm is proving that this notion has been sent to the oblivion. But of course, it took some grit, guts and a lot of hard work along the way for Balami to get there. 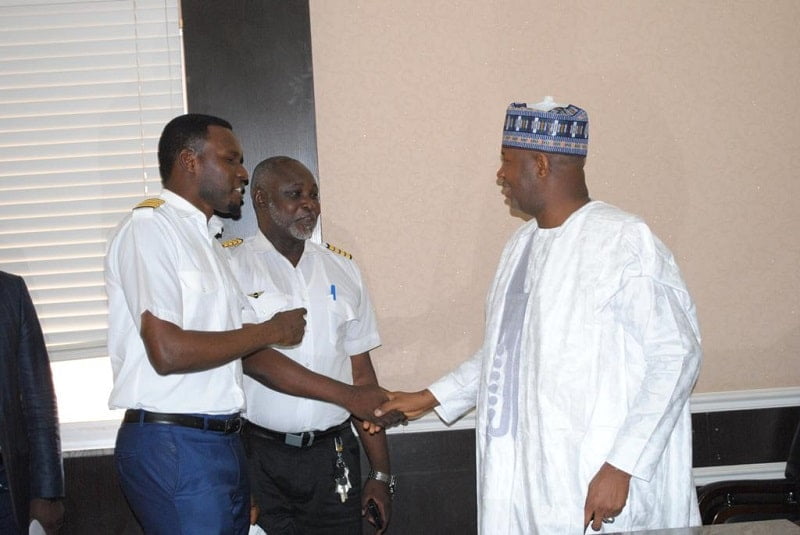 In this exclusive interview with PLEASURES Magazine, the President, National Association of Aircraft Pilots and Engineers (NAAPE) who doubles as the Chief Executive Officer of 7 Stars Global Hangar, Engr Isaac David Balami, speaks with the Publisher, PLEASURES Magazine, Adedotun Babatunde, on his amazing journey from been a ‘’suya seller, painter and suck-away evacuator’’ to one of the leading providers of aircraft maintenance, repair, overhaul and modification services in the world. 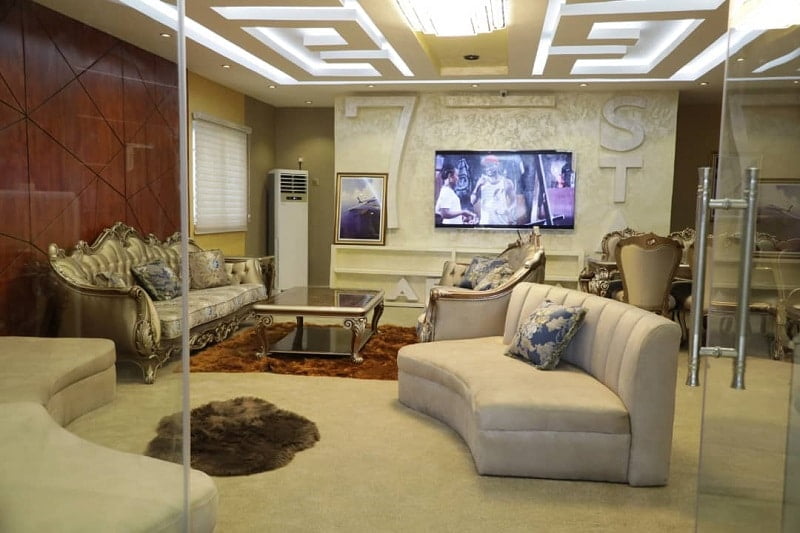 According to him, ‘’ I come from an extremely humble Christian background in Borno state, a state in north-eastern Nigeria. My parents and grandparents were privileged to be Christians, my parents are also pastors. I grew up in a large family, my parents were not doing very well and found it hard to pay for the kind of school I wanted to go to.

‘’One thing I tell people is this, in life, you must know who you are! God did not bring anybody into this world for no reason, everybody has a reason why he or she is existing. My family named me Isaac because they believed I would bring laughter to the family, community and my generation. 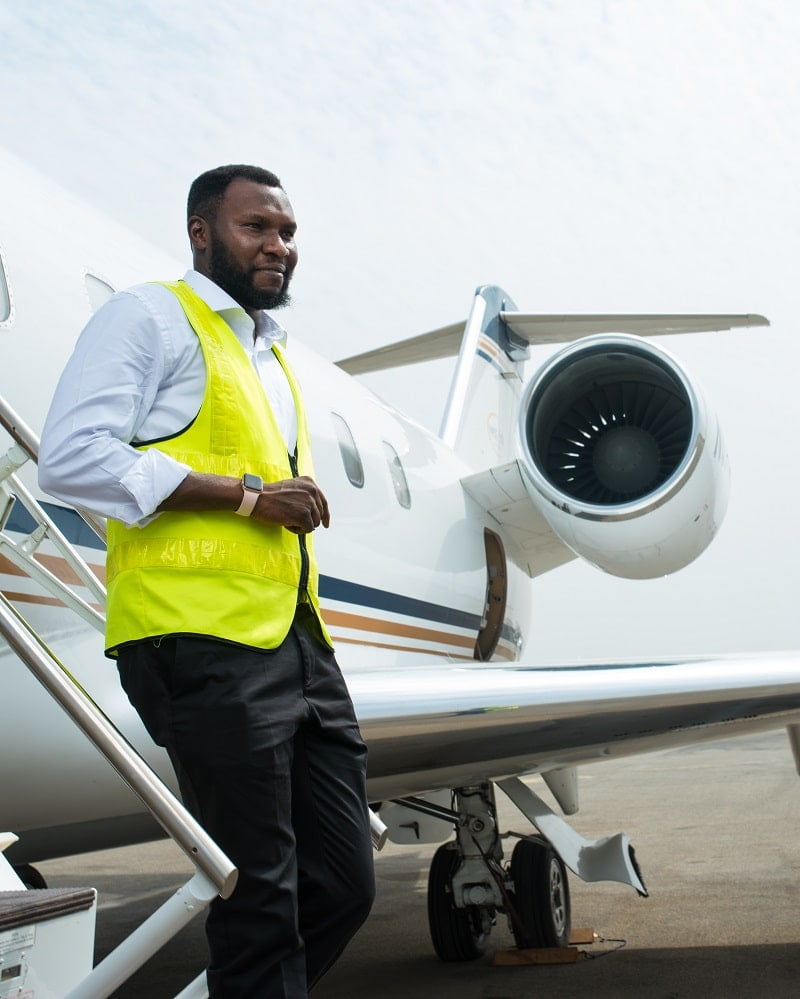 On what has helped him to become what he is today, Engr Balami averred that the Industry is for the bold and courageous. 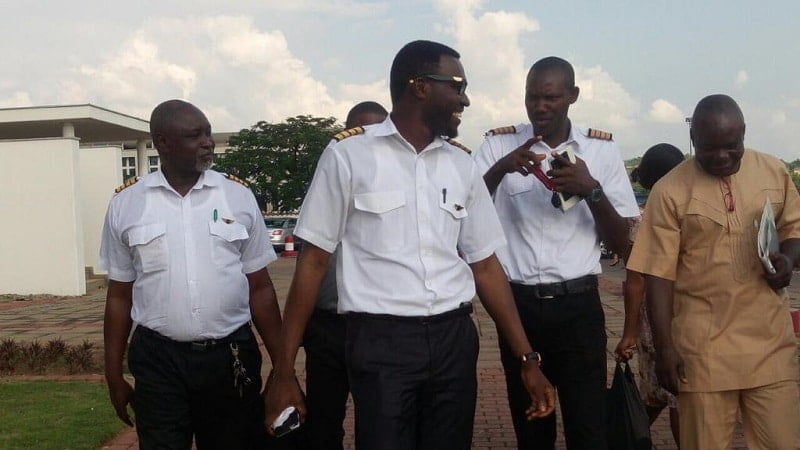 He said: ‘’What has helped me is my being bold. It takes a bold person to be able to take up the pressures in the Aviation Industry. It is not for weak people. Growing up you can imagine a young man, sleeping and waking up in the bush, encountering snakes and all sorts.

‘’Going through that wilderness, going through tough times, sponsoring myself, these are what have shaped me! Aviation is a global business but at the time you would hardly see Nigerians in the various fields in the Aviation industry. I was young and inexperienced but I had the drive, passion and commitment to excel and it was my desire for the airline owners to be able to train locals to take up the jobs the white people were doing, not that I was racist but because I believed they can do it.

Against the threat of being sacked, he said he contest for election to be head of the airline and won by a landslide victory against the incumbent president who was his director at the time.

‘’I chose between losing my job and winning the election and I made them know that if I lost the election it would be on record that I chose to salvage my people working in this industry at the peril of losing my job.”

On the making of his yet to be launched airline, Engr Balami said “The airline will redefine the aviation industry, and change the entire narrative.

‘’The plan is if you fly economy class with us, you will be treated as a business class passenger. Currently, we’re bringing in some aircraft that have all been converted to business class. We will be having our VIP lounge therein; we are trying to give people that fly private jets an exquisite experience with us.

‘’With us, you’re assured of safety and comfort. With God by our side. It’s a one-stop-shop and we’re redefining the entire status quo.” 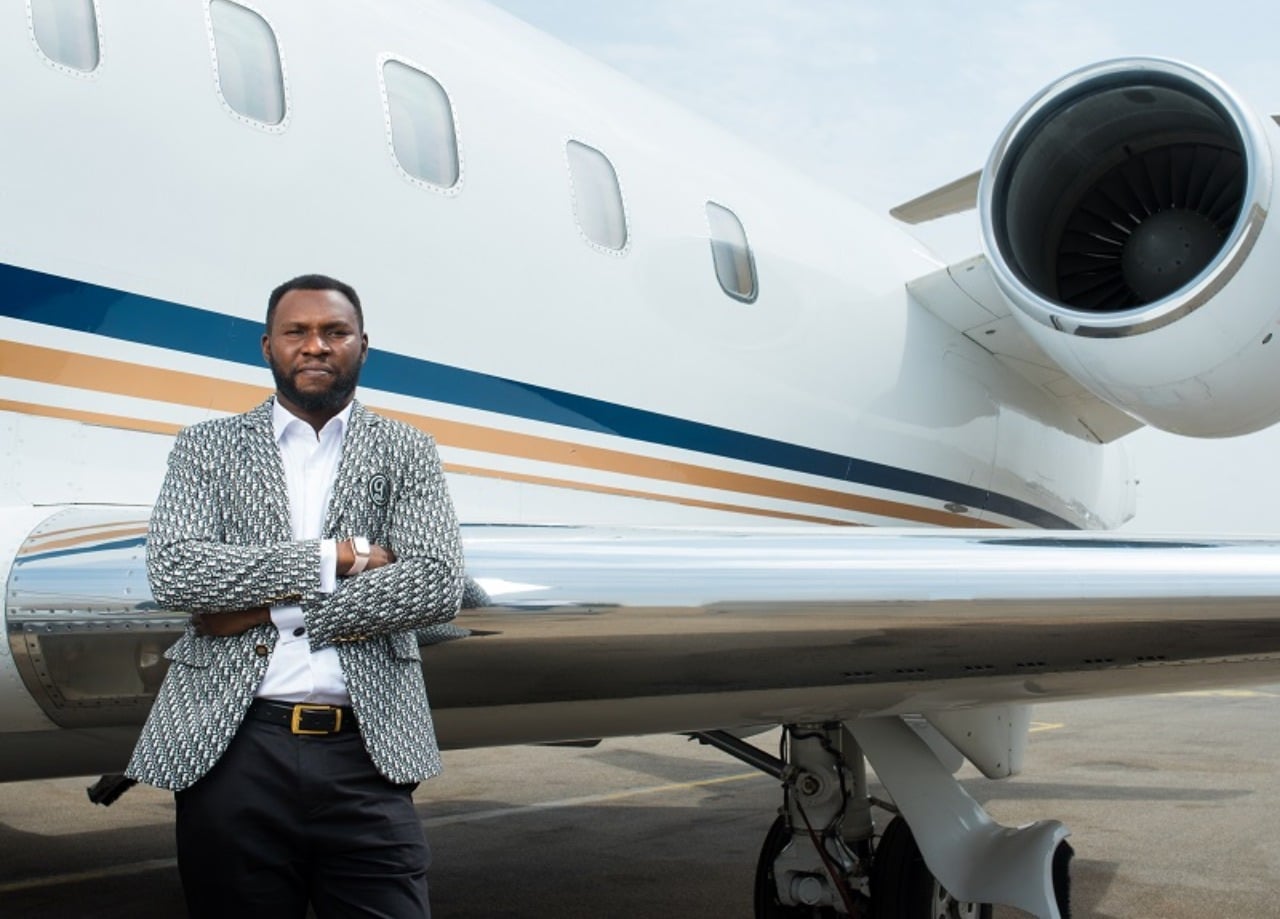 On what the future holds for 7 Star Global Hangar, Engr Balami averred that in the next three years, the company project to be at the New York Stock Exchange while in the next five years, it will not just be doing Aircraft maintenance but by God’s grace have assembled a team of aeronautical engineers, aircraft maintenance engineers to fly the first made in Nigeria aircraft.

‘’The Chinese now have made in China Aircrafts. While we are still a consuming nation? We can manufacture aircraft, if from nowhere, a boy from Borno, God can use me today to create jobs in the aviation sector, if as a nobody, God can take me to this height, what that means is that with the current team I have on the ground, with the expertise, the experience will be global exposure. We can salvage the Nigerian Aviation sector,” he said.

On giving back to society through NGO, he said the Isaac Balami foundation a Nigeria Initiative is empowering and uniting people.

‘’We train people to acquire skills, we help the needy with fees among other humanitarian activities. Coming from Borno state, I was raised in the midst of Muslims, I was trained and empowered by Muslims and the Isaac Balami Foundation is working to ensure there is unity, national healing, peaceful coexistence, religious tolerance.

‘’Today, Nigeria is polarized, so much dichotomy, so much hatred and envy amongst us. When I saw that we are at that level, I had to go beyond the Isaac Balami Foundation for the My Nigeria Initiative to emerge. We wrote to the Presidency and today the First Lady is our National Grand Matron.

‘’We launched this foundation with several dignitaries and ambassadors from across Nigeria in attendance. We called together 200 youth organizations and held a programme to sign a peace accord after our brothers and sisters from the eastern part of the country were asked to leave the north. Since then, there has been a lot of stability and peace.’’
Also featured, in your favourite PLEASURES Magazine is the President of Seychelles, H.E Danny Faure, who believes persistence is important in becoming a leader in your field. A seasoned and experienced politician, President Faure talks to PLEASURES Magazine about how his own experiences and his motivation to improve the lives of the Seychellois people, as well as those around the world. Also, an exclusive on Beech Holdings, owned by one of Manchester’s biggest developers Stephen Beech, PLEASURES Magazine caught up with him to talk about the growth of Manchester and what the future holds for Beech Holdings.

It is also a pleasant read with, Morin O’s Creative Director, Maureen Obaweya, who has been on the cutting edge of making quality leather goods in Africa for over two decades. A look at Century Plaza, a luxury living in the heart of Los Angeles and latest collections from African Luxury fashion brand by Adebayo Jones, the London based fashion Designer and style consultant who have long been associated with glamour, elegance, opulence and style. And as usual, the magazine is incomplete without your usual light stories and other human-interest narratives such as startup success stories of Kator Hule and Olubunmi Crown Gbadewole.