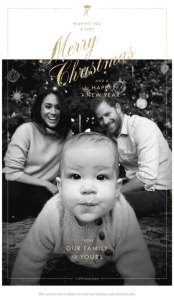 After the Duke and Duchess of Sussex released the electronic card on Monday, December 23, royal enthusiasts pointed out that the 39-year-old actress was the one to snap the family of three for the occasion.

“Merry Christmas and a happy new year! From our family to yours,” the greeting read on the black-and-white photo of Harry, 35, and Meghan, 38, laughing as Archie, 7 months, crawled toward the camera.

In honor of Gavankar’s adorable snap of the family, Us Weekly is rounding up everything to know about the woman behind the camera.

Stars Who Have Defended Duchess Meghan and Prince Harry

She’s Besties With Meghan
Meghan and Gavankar have been friends for more than 13 years. And before the former Suits star started dating Harry (and subsequently deleted her personal social media accounts), the two women documented their friendship via Twitter.

“With over a decade of friendship, my State of the Union hang times with @meghanmarkle are so cherished,” Gavankar wrote alongside a sweet selfie in October 2016.

She’s An Accomplished Actress
Gavankar’s most recent role was a part in Jennifer Aniston and Reese Witherspoon’s AppleTV series The Morning Show. She also had recurring roles on Arrow, True Blood, The Vampire Diaries, The L Word, The League, Sleepy Hollow and The Mysterious of Laura.

Gavankar will start alongside Ben Affleck in the upcoming movie The Way Back, which will hit theaters in March 2020.

She Attended the Royal Wedding
The Blindspotting actress was among the 600 guests at Harry and Meghan’s wedding at St George’s Chapel in May 2018. She also attended the more exclusive 200 person reception after the ceremony.

“Emotionally hung over. Headed to [the airport],” Gavankar wrote via Instagram Stories after the nuptials.

How She Stays Close to Meghan
The two women don’t let Meghan’s move to London keep them from being besties. “We sit on Facetime or Skype and we talk for hours – mostly about things that are intensely important to us,” Gavankar dished on Good Morning America in 2018.