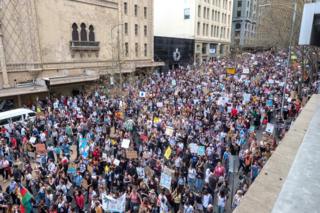 A global climate strike is under way, with millions of people protesting for “an end to the age of fossil fuels and climate justice for everyone”.

The event was sparked by teenage campaigner Greta Thunberg, who is attending the New York protest, where 1.1m children have been allowed to miss school to join the march.

Here are pictures of marches across the world.

A protester holds a placard with the image of Sir David Attenborough, a British broadcaster and climate change campaigner (above).

Protesters played dead near the Ministry of Natural Resources and Environment office in Bangkok.

Climate strike protesters gathered in front of the Brandenburg Gate in Berlin.

In London, protesters gathered on the steps of Nelson’s Column in Trafalgar Square.

In Southampton, Extinction Rebellion’s Red Rebels were seen outside of Carnival House before marching through the streets.

Protesters gathered in the Old Town Square in Prague.

Protesters held a colourful march at the University of the Philippines in Quezon City, east of Manila.