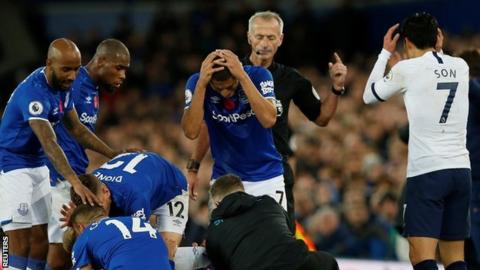 Everton striker Cenk Tosun says he would rather not have scored the 97th-minute equalizer against Tottenham if it meant Andre Gomes had not suffered his horrific ankle injury.

Gomes suffered a fractured dislocation to his right ankle and will have surgery on Monday.

A distressed Son Heung-min of Spurs was sent off in the 79th minute for his tackle on the Portuguese midfielder.

“You win, you draw, you lose but all that doesn’t matter when something like this happens,” Tosun wrote on Instagram.

“I wish I didn’t score, I wish we lost 0-5 and this didn’t happen. I know you will come back stronger bro and we will be there for you.”

There was a six-minute stoppage as medics attended to Gomes.

The incident initially looked innocuous, but the mood immediately changed among the players and crowd as the full extent of the injury became apparent.

“Everybody is sad inside. Some players, they nearly cried,” said substitute Tosun, who had been on the pitch 10 minutes when the incident happened.

“He was in shock; his eyes were open so big. He was like crying, shouting and screaming.

“I just tried to hold him and speak to him. I tried to tell him to stay calm. We couldn’t understand him.”

‘More than a football game’

“This is a bad moment for us and our team – this was more than a football game,” he said. “We will give all support to Andre and his family. As a group, we have to stay together and show the spirit we showed following the incident.

“Our players now, they are sad, a tough moment for us in our dressing room and for Andre, but the spirit we showed after that moment on the pitch I think is a good answer for you.

“He is seriously injured but I am 100% sure Andre will become stronger as a football player and as a man because he is a fantastic lad, a fantastic professional.”

Everton midfielder Fabian Delph appeared to still be affected in a post-match TV interview when asked about his team-mate.

“He’s one our brothers, someone we care about deeply,” said the former Manchester City player. “It’s hard to put into words. The sooner we can get in touch the better. That was difficult to see.”

‘Son can’t lift his head up’

The TV replay suggested that Gomes suffered the injury after Son’s tackle and before he collided with full-back Serge Aurier.

Goalscorer Alli said he found Son crying in the changing room after the final whistle.

“I didn’t want to look too much at what happened,” said the England midfielder. “I want to send Andre my best wishes.

“Son is devastated and in tears – it’s not his fault. Son is one of the nicest people you’ve ever met. He can’t even lift his head up, he’s crying so much.

“The injury does play on your mind during the match but you have to stay professional.”

Former Toffees midfielder Pat Nevin, who was a summariser for BBC Radio 5 Live at Goodison Park, described the events in the immediate aftermath of the injury.

“This is horrible, horrible,” said the Scot. “The players look devastated and there is utter confusion here. Players with their heads in their hands.

“Son deliberately tackles Gomes, but he does not cause that [the injury]. He is catapulted from that challenge on to Aurier. To blame Son and to say he did that deliberately is 100% wrong. Son is not like that; he is not that kind of guy.

“He does not deserve the treatment he is going to get on social media. He is devastated – he was the cause, but it was not his fault. It’s just one of those things that happen in football.”

‘The players from Everton were fantastic’

Referee Martin Atkinson initially showed Son a yellow card before he changed it to red.

The Premier League explained: “The red card for Son was for endangering the safety of a player, which happened as a consequence of his initial challenge.”

Tottenham boss Mauricio Pochettino insists the forward had no intention of injuring Gomes and believes VAR should have been used to overturn the sending-off.

“It was clear it was never the intention of Son to create the problem that happened afterward. It is unbelievable to see a red card,” he said.

“We all feel sorry for Andre. I want to send my best wishes to him and to his family in this tough moment. We want to send, on behalf of the squad, our best wishes.”

Pochettino also revealed that Everton’s club captain Seamus Coleman, who was out for a year after suffering a double fracture of his lower leg in March 2017, spoke to Son afterward.

“The players from Everton were fantastic. The captain came to the dressing room to console Son,” said the Argentine.

“I want to say thank you to the players and Coleman, who came in on behalf of the squad of Everton.”